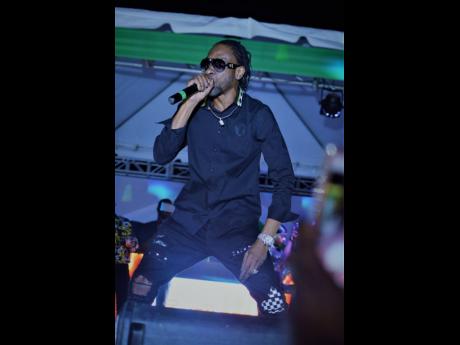 After being unable to perform back in August due to law enforcers pulling the plug on the event at 2 a.m., dancehall artiste Bounty Killer returned to the Footlose stage last Saturday night with a vengeance.

Though he came to please his loyal fans who returned to the Mas Camp venue to see him in action, the 'five star general' also came with a score to settle.

In true Bounty Killer fashion, the deejay spoke out against what he believes is a fight against dancehall culture by the authorities, and warned them not to bring politics into the entertainment space.

"When high society a keep dem brunch, dem lunch, dem munch, dem nah get nuh punch," he said. "This is a big, public well-known venue. All the other events enjoy their time and have fun here. I don't know what went wrong why we as dancehall and Jamaican people can't enjoy our culture. I'm not gonna compare to anybody else but the politics affi gweh."

And the 'Warlord' wasn't finished.

"Yuh see if a dancehall unu a fight, unu a go dead. And yuh see if a ghetto people unu a try fi fight, Jamaica a one big ghetto wid a likkle uptown part, unu will drown inna dis," he continued, before reeling out hits for his eager fans, during a jam-packed 20 minute set.

In between his social commentary, he thrilled with songs such as Cellular Phone, Eagle and Hawk, Fed Up, Benz and Bimma, and Can't Believe Me Eyes.

He received huge forwards from the audience, who were glued to his every word from start to finish.

Well aware of the attention he commanded, the deejay used the opportunity to point out the part the consumers play in assisting with the fight against dancehall.

Reiterating that this is dancehall country, Killer said Jamaicans have welcomed any and everything into the entertainment space.

"Unu Jamaicans, unu leggo everything and take up every nothing. Jamaica, how we get so loose?" he questioned. "Only we foot dem fi loose. Dis is dancehall country, any other music must dead bout yah, a we rule dis."

Though the night belonged to Bounty Killer, selectors Arif Cooper and Scientist ruled the turntables, thrilling the Footloose crowd to hits from the 70s, 80s and 90s before and after the veteran deejay's performance.