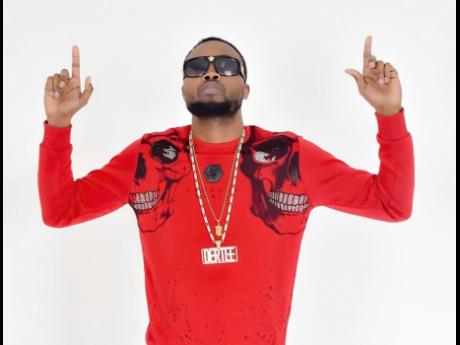 Dertee says he wants his music to uplift people.

UK-based artiste Dertee says in the midst of all the negativity happening in today's society, he wants to spread a little joy and remind people to 'smile'.

That is the title of his latest single, a collaboration with dancehall artiste KipRich.

Speaking with THE WEEKEND STAR recently, the artiste said he wants his music to have a positive impact on people especially during what he describes as 'dark days'.

"We live in a time when things are so dark that people need inspiration just to get by. There are people who wake up in the morning and they don't see anything to be happy about. This song is called SMILE and it's to remind people that despite everything, there's something to be happy about and we should all smile," he said. "I want my music to make people feel good so we're just sending out positive vibrations."

The song was released early last month and has received more than 50,000 streams on Spotify. It has been getting heavy rotation on radio stations across the UK.

Dertee says he believes people are showing the song love because of its message.

"This song is special. People love it. Majority of the people say dem love the energy, the message, they say it's uplifting and that's exactly the kind of feeling they want to get when they consume music," he said. "The feedback has been overwhelming and it makes me happy to know the song is making people happy. That's why we created it."

SMILE is the lead single from Dertee's new EP, Tru Di Gate , which is set to be released in January 2020.

He says the project will showcase his versatility as an artiste as he has songs to suit everyone's taste.

"I've got songs for the ladies out there, songs for the more mature audience, songs with a positive vibe. People can just expect good music overall," he said.