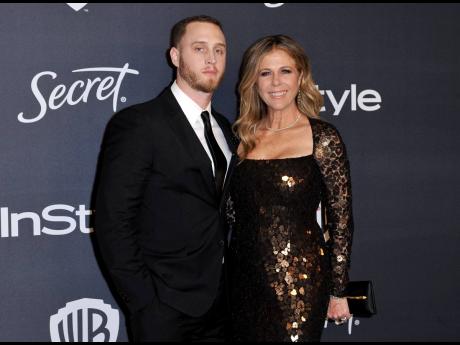 Chet Hanks (left) and Rita Wilson arrive at the InStyle and Warner Bros. Golden Globes after-party at the Beverly Hilton Hotel on Sunday.

Jamaica’s presence was felt at the 77th annual Golden Globes on Sunday courtesy of a dose of patois from veteran actor Tom Hanks’ son, Chet.

In a moment that made headlines yesterday, the junior Hanks is captured on video on the red carpet sending ‘big ups’ to the attendees ahead of the show.

He walked the red carpet in support of his father, who was being presented with a lifetime achievement award.

But, he undoubtedly stole the spotlight with his patois-speaking episode, a moment described by CNN as the Golden Globes’ most bizarre.

“Big up, big up! The whole island massive. It’s ya boy Chet coming straight from the Golden Globes,” Hanks is heard saying in the video.

“You see, my father Tom Hanks is presenting an award, soon forward come. Big up, tune in,” he continued.

He uploaded that video to his official Instagram page with the caption, ‘Big up fimi whol family soon com at di awards na seen, chune in’. The video has been going viral on social media.

Many users have been asking why Hanks chose a Jamaican accent and demanded to know who his ‘island friends’ are.

“Who has he been chillin with? Who is his Jamaican friend,” one user on Twitter wrote. But others accused him of “butchering Patois”.

Hanks’ Instagram page, particularly his stories, shows that the 29-year-old appears to have a legit love for Jamaican culture.

In a picture posted to his Instagram stories, Hanks is seen holding his father’s award with the caption ‘bumb*cl**t, s**t going brazy’ with a plethora of Jamaican flags.

While some on the international circuit viewed the posts as awkward, some Jamaicans are flattered.

“I see everyone saying they’re offended, I for one thought it was hilarious and I was happy to hear someone copy a Jamaican accent at the Golden Globes. That’s huge,” one Instagram user commented.

“Big up yuhself Chet,” another posted.