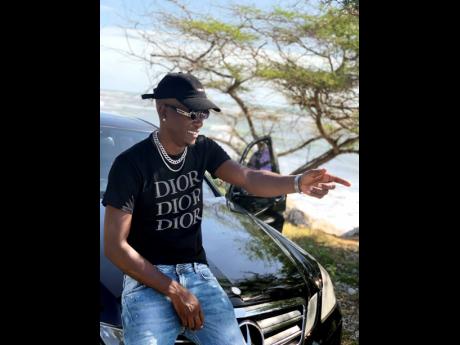 Following the release of his sexually charged single ' Feelings Too Heavy', last year dancehall artiste Laden promised to keep the momentum going on his career.

Almost two months into 2020, the entertainer is looking to make good on those promises with the release of a new song that he believes could be the hit he's been looking for.

"The song is called You Can Make It and it is the song with the message. It's another motivational song from Laden and it is a hit, I just know it. When yuh listen it, everyone can feel the song right away. It will make people feel uplifted because it's telling you 'yes, you can make it'," he said. "People are vibing to the song already. Dem really love it and I feel good to know that I'm connecting with people this way again. I'm older and I feel more comfortable expressing myself in real ways so the people can relate. People loved Laden because he was always a positive youth. That hasn't changed and the songs that I will be putting out there will reflect that."

The artiste explained that having toyed with songs geared towards a more mature audience, he has mastered what it means to keep in touch with all his fans.

" Feelings Too Heavy was just me showing off my diversity and showing I can produce content for adult audiences. Dancehall is all about seasons, one minute it's the time for the social commentary songs and another for the raw songs that will run the place. I want to be able to keep up with all the seasons," he said. "There is no restriction on music. I just want people to pay attention to my work. I have love for the music and I go about the business the right way. I don't try to overdo anything. I try to get the timing right to release music and I don't try to pressure anyone or push myself on people.

"I do think there are a lot of solid artistes out there that the industry doesn't really pay much attention to because they are not in the top 10. But I always tell people to keep at it. Keep recording, keep working. You will pull through and you will overcome the struggles," he said.