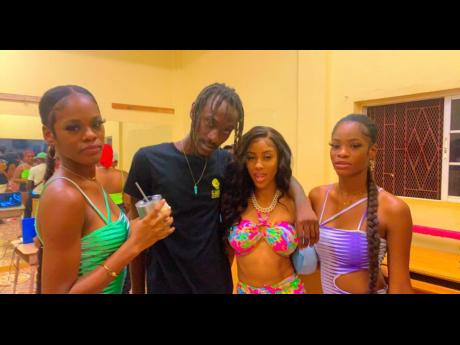 Dancehall sensation Lanae delivered a high-energy performance at the music release party for dancehall artiste Jah Tee in Windsor Heights in St Catherine on the weekend.

Although soldiers showed up and searched everyone in the venue, as the parish is under a state of public emergency, the majority of the patrons stuck around to see Lanae perform.

She started off her set with her breakout hit Too Young, which features incarcerated dancehall star Vybz Kartel, and got a lot of cheers. She then introduced her next song, Destiny, taking time to converse a little with the crowd. She closed her set with her dancehall fave, Nothing Fi Show, which got a great response from the females.

After her performance, she interacted with fans and posed for a few photos with Jah Tee, who is the first major act signed by the UK-based label, El Gringo Records.

"He is the first artiste we have ever signed. Usually, we work with freelance artistes, so this event will launch his latest single, Zone Out. And this event also marks one more year around the sun for me," said Reece Dry, CEO of El Gringo Records.

Jah Tee performed Zone Out, which was produced by El Gringo Records and SmokeShopStudio in Canada, and got good response from his hometown crowd.

"We would like to thank Lanae for making this event another special one," Reece Dry said.