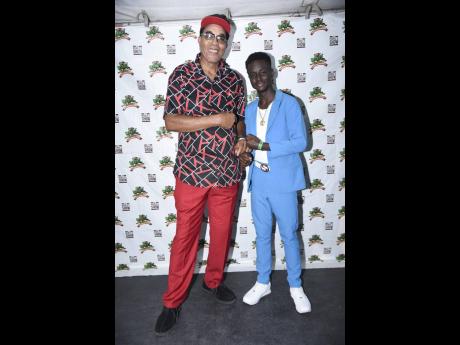 The 19-year-old delivered a set comprised of two original tracks titled Girl You're Mine and Better Days and added covers of Can We Talk by American R&B singer Tevin Campbell; Take Me Home, Country Roads, originally by John Denver, which Toots and The Maytals recorded a rendition of and Rasta Man Chant by Bob Marley and The Wailers.

"I was really nervous at first, but once I got on stage and started connecting with the crowd, I became calm," Clarke told THE STAR.

"My catalogue is small, so I thought I'd include a few songs which showed my range and also, a show like Rebel Salute means there must be some sort of salute...as the opening act, I wanted to set the tone of tributes to the veterans who have influenced my sound," he added.

Clarke says he has dreamt of performing for a large audience like that attending Rebel Salute and is elated it has become a reality. He is hoping the performance will increase his popularity and "launch me to the highest of heights".

"The persons attending are from all across the world, and I hope it gives me opportunities to travel so that I can deliver peace, love and loyalty to other countries," the singer continued.

He shared, "Kevoy was brought to me by a friend and hearing a voice like his, as a producer who knows real good talent, I could not pass him off or ignore it."

Scorpio said the singer has inspired him to return to the studio after being absent from the production space for 11 years.

"Me love studio enuh, but I haven't done this in a long time, and I've been saying me want start do some work with some young, promising talent," Jack Scorpio said.

"While deejays are dominating right now, singing is still big all over the world, and this is showing you have to have a balance of reggae and dancehall sounds. It is what the genres need. I'm trying to preserve our music by pushing Kevoy to achieve his true potential, and I believe he did a good job tonight," Scorpio said.