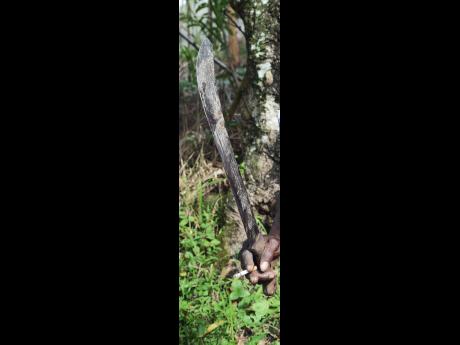 A man had his bail revoked when he appeared before the Kingston and St Andrew Parish court on a charge of unlawful wounding on Friday, after he told the court that the complainant was threatening him.

Leroy Malcolm said he was constantly being provoked by the claimant.

"Your honour this man a walk wid cutlass morning and evening and a come a mi gate, when mi a go work and when mi a come from work. Him all bring three a him friend dem fi video when him a threaten mi," he said.

While Malcolm was speaking, the elderly complainant, who stood with the assistance of a cane, shook his head at what he was being accused of.

"Him say him want mi kill him and Your Honour, honestly, mi nuh want fi do him nutten," Malcolm continued.

However instead of the warning that he was expecting the claimant to get, Malcolm himself was locked up.

"For your own safety I am remanding you in custody," judge Lester Crooks said.

Crooks said he was concerned by the demeanour of Malcolm.

"I am finding it hard to think that the (claimant) that walk in here with a cane would make such threats," Crooks told the court after Malcolm was brought to the holding area by a police officer.

He is to remain in custody until December 8 when his case will be mentioned again.