Bigga was a lover of food 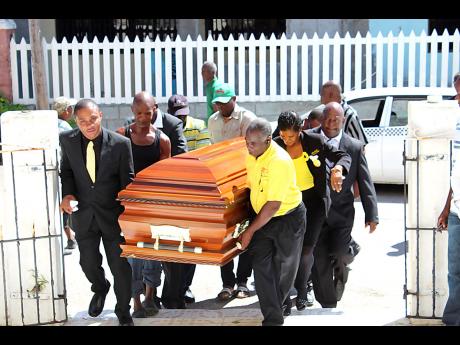 Minister Pauline Knight brought out the smiles, the snickers and all-out laughter as she delivered the eulogy for Maurice George Whittaker, nicknamed 'Bigga' at his thanksgiving service on Saturday.

"Maurice was the only child for Charlette Evans Whittaker. She loved him, fed him, and very nearly spoil him. At age 14, you could find her bathing him in a bath pan," she said at the funeral held at the William Knibb Baptist Church in Trelawny.

"He loved his food from early days, right to his death, hence, earning the name Bigga as his body showed its appreciation for food," Knight said.

"On Sundays, I used to carry dinners for my aunt. I had to share Bigga's own differently. He would eat his own, and my aunt would give him some of hers," she told WESTERN STAR.

Carleisha, his daughter, said, "Daddy loved us and cared for us. He never flogged any of us because he believed his stern voice was good enough to keep us disciplined. We were proud to tell our friends who were flogged that our father never beat any of us," she said.

Patricia Wilson, one of Bigga's cousins, spoke about him as a transport operator.

"He started out driving a minibus called Rat Patrol from Ocho Rios to Montego Bay. Later, he scaled down the distance and operated a car as taxi from Falmouth to Montego Bay. He was kind and was not unwilling to give a free drive. He would say, 'Don't wait until you reach where you are going to tell me you have no fare, tell me when you come aboard,'" Wilson said.

"He was never in a hurry, and never got a speeding ticket. His papers were always up to date because he wanted no confrontation with the police. He was always giving advice. 'Tek time drive the car. Just drive to earn a living, tek care of your family, and pay your bills'," Rohan said of the advice Bigga often gave young drivers.