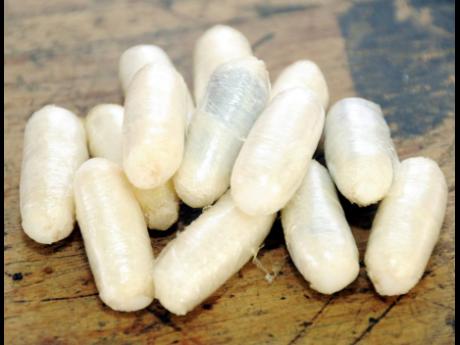 A British woman and her Jamaican boyfriend who allegedly tried to smuggle five pounds of cocaine hidden in packs of seasoning out of the island, have been remanded until September 27, when a medical document for the woman will be brought before the St James Parish Court.

Vanessa Richardson, a 44-year-old cleaner of Gloucester, England, and Damion Nembhard, a 39-year-old chef of Mandeville, Manchester, are charged with possession of, dealing in, and taking steps to export cocaine. They were remanded following their latest court appearance last Wednesday.

Allegations are that on May 15, a security team on narcotics duty at the Sangster International Airport in Montego Bay carried out a search of a flight destined for Birmingham, England.

A suitcase belonging to Richardson and Nembhard was opened and seven packs of jerk seasoning found inside.

The packs were opened and found to contain a substance resembling cocaine, following which the two were arrested and charged.

When the case was mentioned before Parish Judge Kacia Grant, it was disclosed that health concerns had previously been raised on Richardson's behalf.

The court was also told that the matter had been set for a hearing to reduce Richardson's bail offer, which initially stood at J$1 million but was reduced to J$750,000.

In response, Grant suggested that assistance should be sought from the British consulate to find aid for Richardson.