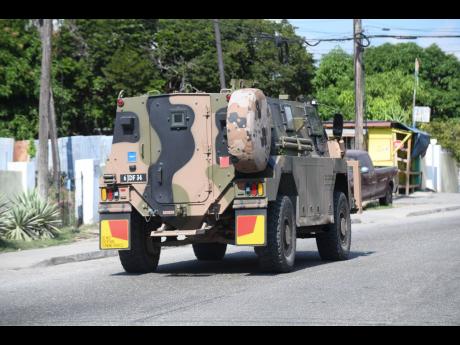 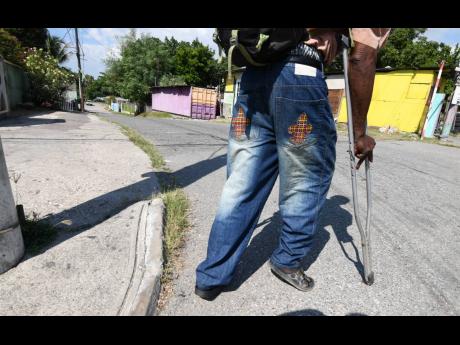 An elderly man walks by the entrance to Jacques Road.

An elderly man walks by the entrance to Jacques Road.
1
2
3
4

Except for a Rottweiler that stood inside its master's gate, there were no other signs of life when the news team visited Byron Road, off Mountain View Avenue in St Andrew, yesterday.

Doors and windows of homes and small businesses were sealed shut. A parked Jamaica Defence Force (JDF) armoured vehicle and two patrol jeeps told the tale of the horrific ordeals that have been unfolding in the area for the past several months.

Byron Road is the reported border between the warring factions in Jacques Road, Bygrave Road and Goodridge Lane.

Some residents say the flare-up is believed to be as a result of the death of a man known only as 'Buju' from neighbouring Goodwich Lane.

The police, however, believe that a dispute over missing material from a National Housing Trust (NHT) work site in the area may have led to the clash.

Over on Goodridge Lane, some of the residents were seen on the street when THE STAR visited the community, but no one dared to venture to the entrance of the road out of fear of becoming the next victim.

As they spoke in hushed tones to THE STAR, a few men kept a close watch on an alley that leads to Jacques Road.

It was mid-morning in the tense community and some of the taxi drivers had already retired for the day.

"They killed a taxi driver already and we not going to play hero. Right now, only women are being spared because all the big people dem who nuh in any war a dead. The man dem all a 'time pedal' people when dem go out to do dem business. Everyone is closing their business on the front because if a man even open, a risk him a run wid him life," one cabbie said.

The aftermath of months of gunfire was evident on Jacques Road, as several vehicles parked along the roadway had bullet holes.

Like the males from the surrounding communities, those on Jacques Road are also afraid to venture to the top of their avenue.

A few of them were shirtless, their way of telling members of the security forces that they weren't carrying a weapon.

"Mi is almost 60 year old and mi go by a cookshop and the man dem fire at me. Mi is a big man who nuh in war, but dem nuh seem like dem wah spare nobody," a man said.

Although the communities are at odds, residents agree on one thing - the politicians can calm things drastically.

"So far is about 11 people dead from October and we need the ministers to come stop this because they can. If it was election time, they would come and ensure say there is peace so why them can't end it now?" a resident asked. "Them come visit one side over the weekend but they need to visit all three part a the community because no one is going to talk bad about their side. From in the 1980s this war a gwan, it only break for a while. The body count is really high and it continues to grow. We can't live like this. All three avenue need to blamed. All I want is peace."