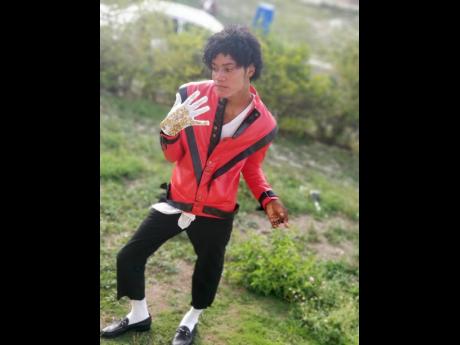 When he burst on to the entertainment scene some two months ago, managers of internet sensation Ghetto Michael Jackson vowed to turn him into a triple threat.

Like the man he personifies, 21-year-old Akeem Walker wants to combine dancing with singing and acting in the hopes of becoming one of the most talked about talents from Jamaica.

Since making his big debut, Ghetto Michael Jackson has already starred in his first music video and come next week, will be looking to jump-start his musical career when he releases his first single, Can I Get A Pic.

In an interview with THE WEEKEND STAR, Ghetto Michael Jackson said that he has been working night and day to perfect his craft.

He expressed that landing his first lead role in Skillibeng's latest music video convinced him even more that he was 'born for this'.

"Mi get better and better at this every day. A Skilli get in touch wid me to put me in the music video and mi enjoy mi self so much. Mi was born for dis and now mi time come, mi ready," he said. "Di girls dem love me. Every weh mi go dem just a shout 'we love you Michael' and a faint. Dem love the dancing but mi a go gi dem even more fi love when di music start drop."

His manager, Wessy Wessy, said Ghetto Michael Jackson has the whole package, and when the song is officially released some time next week, Jamaica and the world will get to see that too.

"From him start get the regular interviews, him free up and start get more into him thing. One time yuh used to affi direct him and thing but now di man natural. Everything just a flow, it a come easy to him. The video him do the other day fi Skilli, not even Skilli did inna it. A just the yute alone run it off and dat alone show yuh say him have it. Now we a work pan our solo thing. We do the song and it a go come out by now and next week so the world can look out fi dat," he said. "From wah day him a practise hard, him a sing hard. The song is a gyallis song because di girl dem love Michael. Inna it him say 'G irls just a faint, when dem a go stop. Can I get a pic? Can I get a pic?' It a go crazy. The song bad. It a go run the place."

Wessy Wessy says the single is only the beginning of his client's musical offerings.

Ghetto Michael Jackson has captivated social media since late May when videos of him executing the late Michael Jackson's dance routines surfaced. Since then, his following has grown immensely; his Instagram page has close to 50,000 followers.