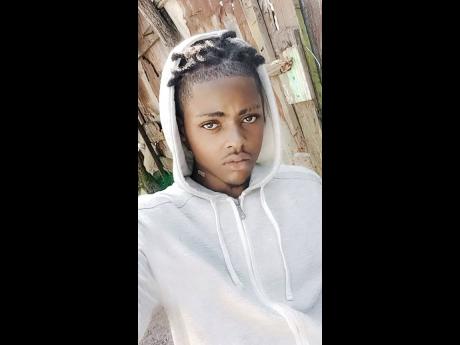 The district of Pear Walk in Browns Hall, St Catherine, was rocked last Saturday by the suspected suicide of 16-year-old Ackeem Williams.

Ackeem was reportedly found hanging with a sheet tied to the ceiling of his bedroom.

Family members and residents described him as a friendly and respectful individual, and cannot imagine that he would take his own life.

According to them, Ackeem had dreams of being an entertainer, as he could sing and DJ. He was part of the group Loyal Family, formed with three other teenagers from the community.

Leader of the group, Fras Boss, told THE STAR that Ackeem was recently at the studio working on some music with them.

"So I really don't see him doing this, he is full of vibes," he said. "His death really affected us, but at the same time it gives us more determination to succeed. We are sorry he will not be around to see when we make it big which was his aim also."

Ackeem, an Enid Bennett High School student, had left his mother's house in Riversdale to live with relatives in Pear Walk last March, after COVID-19 forced the closure of school.

He subsequently left the family home and went to live with a friend, the same house where he was found. Nickely Allen, who operates a shop that Ackeem would frequent, said she last saw him on Friday.

"I asked him to go and buy phonecard for me, and then he left and came back about 7 p.m. Friday night, and I heard him cursing, so I asked him if he wanted any food to eat and he said no," Allen said. Concerned, she followed him as he walked home.

"The last thing he said to me before he went inside his house was, 'mi good, mi just want some rest', and then Saturday morning mi hear sey him hang himself. All now mi can't believe it, he is like my little brother, him even call me sis," she said.

Ackeem's uncle Hilly Christian, with whom he was doing construction work to earn his own money, said the teen was with him on Wednesday at the work site.

"We had a discussion about one of his cousins who had died. Out of nowhere I heard him say that he wanted to be carried in a limo when he died," Christian said, adding that Ackeem told him that he was saving up his own money to bury himself. Alarmed, Christian told him to stop that kind of talk. He never saw him alive again.

"I didn't even go to look at his body because I was in shock, I just can't say what could have gone wrong," he said. Meanwhile, detectives from the St Catherine North police have listed the death as a suspected hanging and are still carrying out investigations. An autopsy will be done.