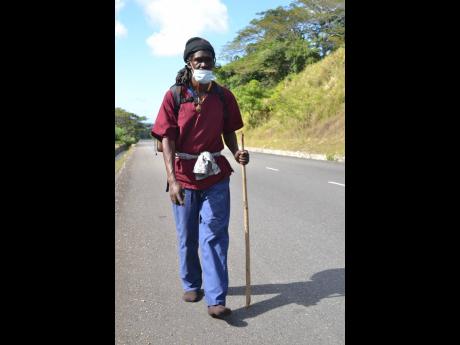 Despite suffering injuries to his feet, Black X is determined to continue his walk to Jamaica House, in salute of healthcare workers and Tacky. 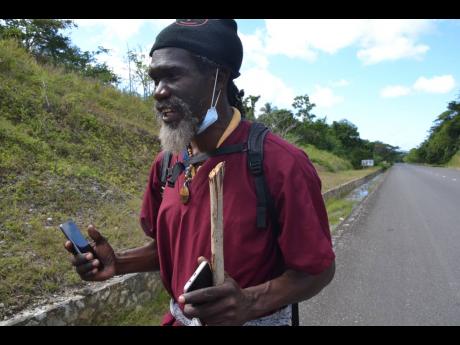 Splinters, gravel and sharp stones have forced barefooted walker Black X off the road, three days after he began a cross country trek in salute of public health workers.

Black X, whose given name is Derrick Robinson, started walking from Westmoreland last Friday, heading for St Andrew, but had to stop in Tower Isle, St Mary, on Monday and Tuesday.

"I decided to walk barefooted this time ... but there are a lot of things on our roads. My foot bottom did full of splinters so I had to stop to take care of it and rest at a friend's house but I'm back on it again," he said. Black X said the walk would end today at approximately 11 a.m. at Jamaica House. He will be continuing his journey in socks.

Black X was dressed in a burgundy medical scrub and one of his trademark chains when he was spotted by THE STAR walking in the pelting sun along the Highgate main road in St Mary yesterday. He said that while he still pays his usual tribute to Maroon chief Tacky, this was more about saluting all the local frontline health workers during the pandemic.

"I have to salute them all because they are taking on something that the world has never seen before. A lot of them have been affected physically and mentally but these people come out like everything criss every day so mi walking to salute them," he said.

Black X said he strongly believes that his marathons around the country would not be in vain and he is confident that Tacky would become a national hero even if it's after his passing.

"It's not in vain as there are others who have joined the walk. But they have not walked as far as I have as yet. I used to wear shoes but now I am not and I will walk barefoot for the rest of my life until I get my desire," he said.