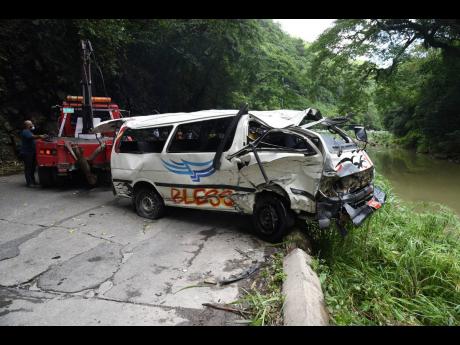 A wrecker lifts the minibus from the Rio Cobre after it was involved in an accident with a motor car along the Bog Walk Gorge yesterday in St Catherine. 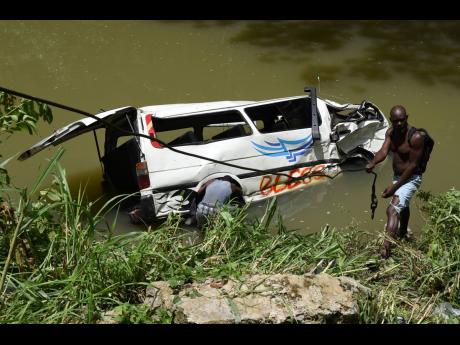 Divers attempt to attach cables to the ill-fated mini bus in order for the wrecker to lift it from the Rio Cobre.
1
2

The age old 'mermaid story' told by residents who live in the Bog Walk gorge in St Catherine resurfaced on Tuesday after another fatal crash.

This time, 59-year-old Linstead resident Valerie Ennis was killed after the minibus in which she was travelling to Linstead collided with a Toyota Fielder travelling in the opposite direction.

Undeterred by public opinion, many residents have locked on to their mermaid theory. Daniel Gayle, who has been diving and fishing in the Rio Cobre for the last 10 years, said the river has a season when the mermaid wants blood and that is when a series of accidents usually occur.

"Whenever time the river change its colour and get dirty like now, that's when it dangerous, and that's usually when the mermaid is active," Gayle told THE STAR. "Some people come here in 2016 and walk up and down the river springing blood and after that, six people dead in a Vitara."

Ennis is the second woman to have died in five days in the Rio Cobre. Ava Thelwell, 49, died last Friday when her motor car reportedly plunged into the river at the Flat Bridge in what the police say could be an apparent suicide.

Yesterday, Ennis was ejected from the minibus she boarded in Angels, also in St Catherine, after the Fielder reportedly overtook a line of vehicles and crashed into it. The minibus then plunged into the river about one and a half miles from Flat Bridge. Ennis was pronounced dead at hospital. Nine other persons including the drivers of the two vehicles were treated at hospital. Jay, another resident, said he stopped fishing years ago after a former resident they called Roaster drowned.

"Mi see him come in one day and a smoke a lot a cigarette and show mi the biggest fish scale mi ever see," Jay recounted. "Roaster decided that him want to go back to see this fish with tail and human head and him never make it back, we find him drown with him neck and hand bruk." Lady G, a resident in her late 50s, confirmed Jay's account.

"It happened 20 years ago when my son was a baby. He (Roaster) showed everybody the big scale and say he was going back for that fish. We know he met upon the mermaid because of how him bruk up when we found his body with a string of fish tied to his shorts," she said. Lady G said the only thing that will quiet the mermaid is blood, so as soon as it is satisfied, the accidents will cease.