Violence has sections of Franklyn Town on edge 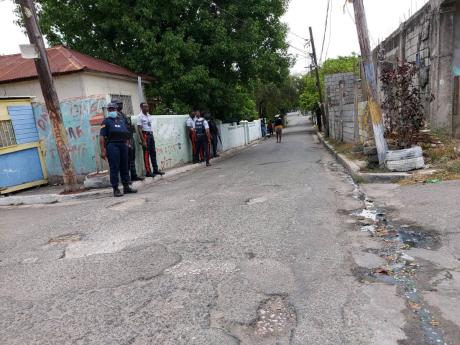 Police on the scene of a shooting in the Kingston East Division.

Jane*, a resident in Franklyn Town, Kingston, said that she is so afraid to leave her house that she now charters a cab to move about rather than walk.

She also said that she has never seen things so bad in the 41 years she has lived there and is currently thinking of moving. Like many others living in the crime-torn east Kingston community, Jane says she is often traumatised by the sounds of gunshots echoing through her walls as a bitter gang war continues to play out, to devastating effect.

"If mi come out and say mi a go di shop right next door mi, and see that no one is on the road, mi a turn back and go inside," Jane told THE STAR on Tuesday. "Normally, when mi a go di supermarket, mi can walk wid mi cousin or a friend because is a easy 15-minute walk. But mi nah run dem risk deh, because dem a shoot anybody dem see when dem a go pon dem move."

According to residents, more than six people have either been killed or injured by gunshots in the past month, but the current spate of violence in both Franklyn Town and McIntyre Villa (Dunkirk) dates back to last year.

Senior Superintendent of Police Tommie-Lee Chambers, head of the Kingston East Police Division, confirmed that there has been a recent flare-up in violence in sections of Franklyn Town.

"It was an internal thing within Dunkirk space back then, but I will be going into the area later to find out what is causing this recent flare-up," Chambers said.

9 PER CENT INCREASE IN MURDERS

Police data indicates that Jamaica is experiencing a nine per cent rise in murders this year, when compared with the corresponding period last year. As of October 16, the country has recorded 1,130 cases of murder. The Kingston East Police Division has recorded 74 murders, which is 19 per cent above last year's figure. Shootings in the division have gone up by 43 per cent as well.

Just last week, a well-known street vendor was shot multiple times during a drive-by shooting. Residents surmised that this was a reprisal for another shooting in which a man, identified only as 'Junior', was shot and injured on York Street.

A few days later a woman, who residents say had just purchased a house on Lacy Road, was shot and killed during another drive-by shooting. A man, who she was supposedly walking to meet, was also shot after he attempted to flee the scene. He is currently in hospital. Then on Sunday, a 17-year-old was shot and killed as he participated in a pre-Heroes Day clean-up event. Another resident said that they are in fear.

"When yuh see how Franklyn Town scanty, yuh muss know. A two different shootings me witness inna one week, and right now mi fraid like a puss, 'cause I don't know what is to come next," the resident said.

There has been a strong police contingent patrolling McIntyre Villa and other troubled areas in Franklyn Town, such as Sommerset Road and St Albans Lane. However, Jane believes that more drastic measures will need to be taken if the authorities are to restore peace.

"We need something like a ZOSO (zone of special operations), because having police or soldiers driving through the area only when things flare up won't work, especially when it seems like the gunman dem a outsmart di police wid dem movements. As a police jeep drive off a one road, yuh hear gunshot pon di same road weh dem a come off," she said.