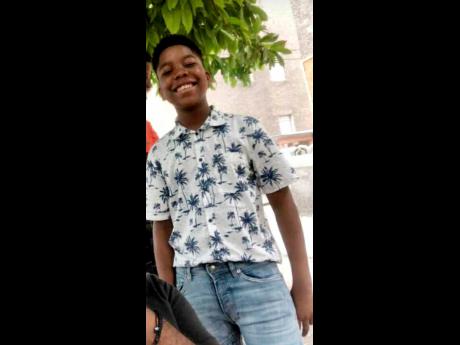 A mother is left to ponder where she went wrong with her 16-year-old son Damonick Deerr, who was stabbed and killed by one of his friends on October 1, following an argument over $10 during a game of dice in McIntyre Villa, Kingston.

What's worse for Ashona Wilson, 40, is that Damonick's tragic death occurred just weeks before her eldest child, Maleake Thomas, 20, received the GraceKennedy/Carlton Alexander scholarship to further his studies at the University of the West Indies, Mona.

Maleake is a second-year student is currently doing a double major in economics and accounting while Damonick was in his final year at the Clan Carty High School.

A distraught Wilson, who makes her living from clothes vending, told THE WEEKEND STAR that she is unable to come to terms with the death of Damonick, the second of her four children.

"I often sit down and question myself where it went wrong. I don't know if it was the environment," said a tearful Wilson. "Not everybody is going to be focused like a Maleake, and the system do get out the kids dem at times, but I think he was easily misled. I always encouraged him to be a leader and not a follower, to do something positive that people would want to follow."

Although happy for the successes of her Maleake, her eldest child, she said that her joy quickly turns into sorrow whenever she thinks about Damonick.

I honestly tried my best

"I cannot beat up myself and feel sorry for myself for too long because I know I honestly tried my best," she said. "I have four kids and you know you have a likkle rough one in every family. Damonick was like that. He was a little bit rough around the edges but at the end of the day he was a good kid because he was very compassionate and helpful. But he was very stubborn and had a bad temper."

"Him always a come and say 'Mommy yuh all right? Mi have $500, yuh wah mi buy yuh nothing?'. But mi nah sugarcoat nothing, he was fearless and the rough one," she said.

His death came as a shocker to several residents in McIntyre Villa, which has seen a flare-up of murders and shootings over the past month. According to the police, Damonick and a friend were playing a game of dice when they had a disagreement over raising the stakes from $10 to $50. Damonick decided to stop playing but an argument ensued and he was stabbed multiple times in his chest. Wilson said that she did not know when Damonick left the house on the day he died.

"I only hear my friend came to tell me that my son was stabbed. When l reached the hospital and see his condition and the amount of blood that he lost I started crying," she said.

Thomas, who hopes to one day become an external auditor, is totally dejected. He said that he shared a close bond with his brother and tried several times to get him to focus on his education.

"I would speak to him, but I guess it was just hard for him ... I tried my best to counsel him ... we were very close. In the evenings when I go home we would always play and spend quality time until it is time for me to log on to class," he said.

"It's been rough. It is hard coming home and not seeing him around. I have night classes and that affects me as well. I feel very depressed."