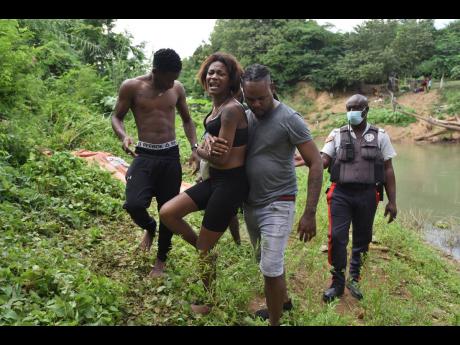 Daliah Baccas, sister of Damoya, is consoled after Damoya’s body was retrieved from the Rio Cobre yesterday. Damoya was swimming with friends on Monday when she got into difficulties and drowned before help could reach her.

The body of a 14-year-old girl was fished from the Rio Cobre in Tredegar Park, St Catherine, yesterday. The deceased has been identified as Damoya Grant of Tryall Heights in Spanish Town.

The police said that Grant was among a group of friends who went swimming in the river on Monday when she got into difficulties and drowned. Members of the Jamaica Constabulary Force, the Jamaica Defence Force and volunteering members of the public carried out a search of the river on Monday, but it was not until yesterday that her body was found.

"When people drown inna the river it lock the body dem right there," said Brown.

The community diver said that young Grant was the lone female in the company of two males, and only one of them could swim. He said that Grant and another of the youngsters got into difficulties. One was rescued by the swimmer in the group but he was unable to help Grant.

Amorel Wright, the deceased teen's mother, stood on the river bank and watched in horror as the body was fished from the water. Wright did not speak to the media but Kedian Williams, a family friend, offered a few comments.

"When we got the news we were in shock and all of us join in the search, walking the river bank, but we didn't find her," Williams told THE STAR.

She made an appeal for schools to be re-opened, opining that the online schooling is not helping the students.

"If Moya was in school she would not find the Rio Cobre," Williams said.