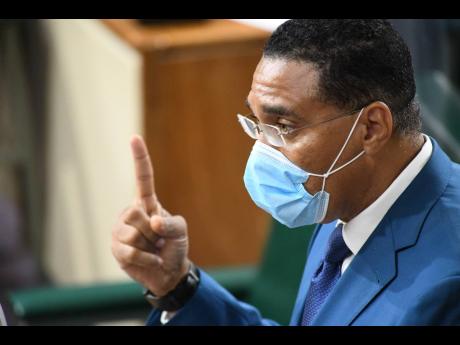 Prime Minister Andrew Holness has given a passing grade to the Minister of National Security, Dr Horace Chang, and Police Commissioner Major General Antony Anderson for their handling of the crime portfolio under instances he described as "unique" to Jamaicans.

Holness was speaking to journalists during a virtual press conference held at Jamaica House on Sunday, where he declared a state of public emergency (SOE) in seven police divisions.

"The commissioner of police, the minister of national security and the chief of defence staff have all been doing, in my judgement and grading, a very good job with the resources that they have and the particular circumstances which are, in some instances, unique to Jamaica and very extreme, that they have been doing a very good job in tackling the issues," he told THE STAR.

Holness said that the decision to implement the SOEs came against the backdrop of a significant increase in murders across these divisions this year as the movement of Jamaicans is restricted by COVID-19 measures. According to Holness, the nation's already alarming murder rate has jumped by 10 per cent in 2021, meaning that Jamaica remains in the top five homicide rates globally. Figures also show that the murder rate per 100,000 in the seven SOE divisions ranges from as low as 47 per 100,000 to a high of 190 since the start of the year.

Police data show that as of Friday, 1, 240 Jamaicans have been killed by the gun. Seventy per cent of them were innocent citizens, according to Anderson. He also revealed that 392 of those killed were recorded in four police divisions across the Corporate Area. Holness said that his administration has been in dialogue with the opposition People's National Party to come up with ways to restore the peace.

"The Government has been in a political debate, particularly with the opposition, regarding how we can increase the immediate capacity of the state to respond to the scale of the increase in crime and the nature of the violence in crime. We have pioneered the use of the SOE in responding to what can only be described as a national emergency," he said.