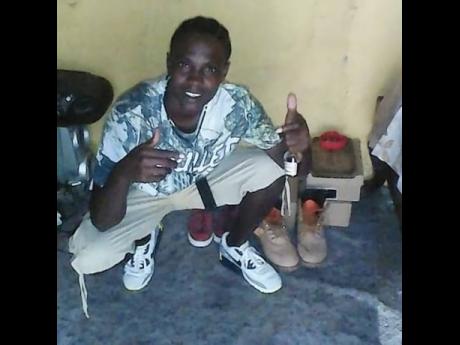 Lloyd Myers cut a dejected figure yesterday as he struggled to come to grips with the loss of a third son to gun violence in eight years.

Another man, 32-year-old Carlington Williams, otherwise called Black Bottle, of a Central Kingston address, was also shot and killed during the incident.

"I feel like there is no more hope! Mi really no have no family fi turn to, a just mi likkle bredda, but mi no wah fi talk to him too much fi break him down because it a affect him just like me," said Myers with tears flowing down his cheeks.

"He is the third son I am losing like this after mi talk to him about the friend and company. The first son [Romario] was at the wrong place at the wrong time [and was killed] in a drive-by. It happened about eight or nine years now," said Myers as he recalled the first of his three heart-breaking tragedies.

Romario was the eldest of Myers five children, four of whom are males.

Six years after his death, Myers was again jolted by the death of another son, Demar.

".... a shop him go and a come back and the gunman dem shot him inna him head. Him never did a war wid nobody, but because a di rivalry weh a gwan wid other men in the area." Myers said.

Having hardly had time to recover from the death of two of his sons, Myers was again plunged into mourning after Mario was cut down in Southside.

The grief-stricken father reflected on the times he had with his son, conscious of the fact that what he has left of him are memories.

"On a day like this, my day off, he would come and spend likkle time with me because me always cook mi Sunday dinner and he would eat, chat a little with me and gone. Mario is a jovial person, enuh; him have a good relationship with people, play him football and smoke him weed at times."

The distraught father said he is appealing to the youths to put away the guns and to embrace peace.

"The youth dem fi desist from the war because a foolishness dem a fight over. Yuh can talk over things, it no have to escalate where you do something and me affi respond to that. It always a guh hurt someone when yuh kill and that is why it a go on and on, because people a get caught up. A time fi di youths start live in unity, violence nuh make it. It's just hurt and more hurt," Myers said.