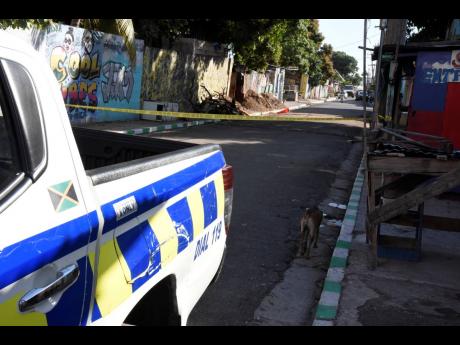 Police cordon off a section of Fleet Street in Kingston where a well-known tailor, Winston Ellis, was murdered yesterday.

The gruesome murder of 50-year-old Winston Ellis yesterday afternoon has completely banished hopes of a merry Christmas in Central Kingston, according to several residents.

Ellis, a well-known tailor, was shot multiple times in the upper body when armed men on foot barged into his residence along Fleet Street sometime around 2:50 p.m. The perpetrators escaped along Fleet Street discharging their firearms as they ran.

THE STAR understands that Ellis' murder is suspected to be a reprisal for the double murder of Mario Myers, 30, and Carlington Williams, 32, both of Central Kingston addresses on Sunday morning. According to one resident who is ready to flee, there are fears that Ellis' murder, the 72nd in the division since January, will trigger ruthless gun activity during the Yuletide season.

"So yuh mean fi tell wi say not even the innocent safe inna dis war? Yuh mean fi say after what COVID did to us last year in Christmas with the lockdowns, a dis stupid gang war ago mash up di likkle excitement weh wi wah? People tired of this now, is full time something drastic happen," the resident said. Another resident said that she was with Ellis merely 10 minutes before his death.

"Mi just come outta him shop fi go look pon di dress weh mi give him to stitch fi me. And as mi outside a bun a spliff pon di sidewalk, mi hear di bag a gunshot dem. It come in like a movie wid wah gwan in south right now," she said.

The news team could not get a comment from any of Ellis' relatives. However, a family friend described him as a community hero who did not deserve to die in such a manner.

"Everybody love him. Although him expensive, a him everybody go to fi do up dem clothes. Him dead without a child or a woman. Arthur no deserve fi die like this at all; him is a loving and kind man," she said. A senior cop at the Central Kingston Police Station said that they are currently exploring several theories.