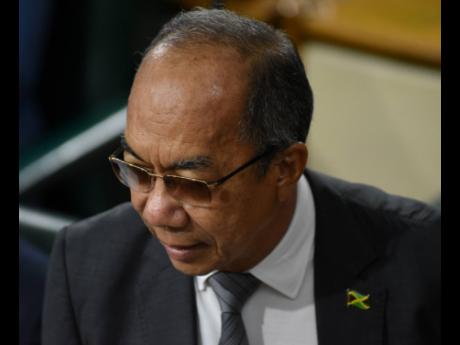 Dr Horace Chang addressing parliament yesterday in the wake of the quintuple murder. 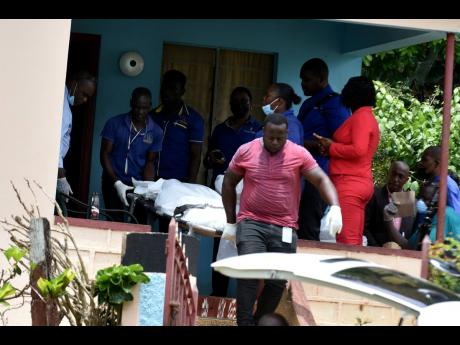 Bodies are removed from the gruesome crime scene.
1
2

National Security Minister Dr Horace Chang has condemned Tuesday's quintuple murder in New Road, Clarendon, as the bloodshed across the island continues to rock the country.

Jamaicans were awakened by the sad news that a Clarendon mother and her four children were found dead at their home, each with their throats slashed. The news has rocked residents in the peaceful community but it also captured another dark and gloomy day in Jamaica where the spilling of blood continues at rampant. Along with Clarendon's chilling homicides, there were also reports of murders in the capital city and in St Thomas.

Yesterday, the police's Corporate Communications Unit confirmed that eight Jamaicans were killed on Tuesday, to add to the 668 murders that have been recorded this year as of June 20. The figures are a one per cent increase of the murders committed in 2021 during the corresponding period. According to Chang, crime and violence in Jamaica is at a chronic stage and immediate solutions are needed.

"This is a national crisis and we have to deal with this disease of violence that penetrates our society. While this is family, it is the same news where young men come from the same community, go to school together, play together, work together, suddenly turn on each other over all kind of issues. Sometimes it is complex gang issues, sometimes it is a simple issue. It seems as if every solution is resolved with a level of violence," he said. "The police have to deal with the criminals either way, and we are working hard at this and have been having successes in some areas. But the level of violence and the depth in the communities will exceed police, what we do and how we police. This kind of brutality will require far more intense values and engagement in communities to identify and intercept those who are at risk and begin to get meaningful behaviour change."

He added that he, too, was shaken up by the news of Tuesday's killings and has called for a multi-ministry approach towards fighting crime and violence.

"It is a disease and we have to find total institutional support in government from the Ministry of Health, psycho-social services, Ms [Olivia] Grange in her area of youth and gender and of course our targeted programmes that the ministry is dealing with. This is the kind of thing that is hard to absorb and understand. I hope this could be a turning point in that aspect. This gruesome brutal murder in this pleasant rural district is certainly way beyond the norm and has impacted our conscience," he said.