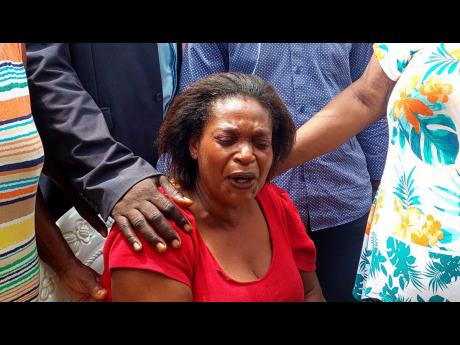 Gwendolyn McKnight, mother and grandmother of the victims, is a picture of despair as persons try to provide comfort. 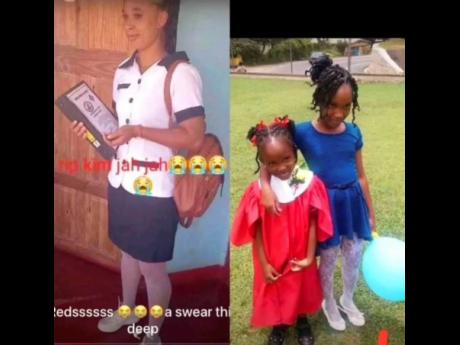 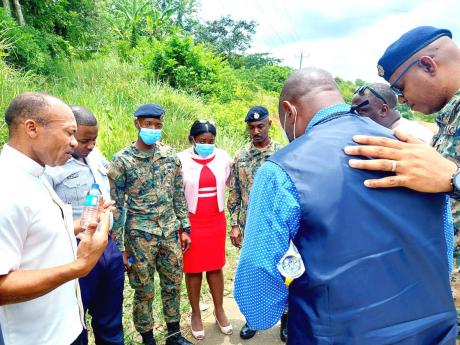 Gwendolyn McKnight howled uncontrollably for hours while she sat on a stool watching police detectives extract the lifeless bodies of her daughter Kemisha Wright and four grandchildren who were murdered early Tuesday, allegedly by a male relative at their home in New Road, Clarendon, on Tuesday.

All the victims' throats were slashed. Rushane Barnett, 23, who police named as a person of interest, was held in Wilson Run in Trelawny last night by the police.

"Dem kill mi one daughter and mi four grand pickney! Why? Why they do that to my little daughter? Why they do that? She was so loving and kind," McKnight wailed. The distraught mom told THE STAR that she was particularly heartbroken by the manner in which her family was killed.

"I don't know how I am going to move on from this. My daughter was my everything," she added. She described Wright as a caring and supportive daughter and mother, who always put her children's interests above everything.

"She was so ambitious. Very ambitious and caring, I could not have asked for a better daughter. Why dem affi tek her like this? Why?! She loved her children so much and did everything to ensure that they are okay," she said.

Her fury, pain and sorrow permeated the air as scores of persons stood in disbelief. The residents appeared shell-shocked after the barbaric nature of the quintuple murder was revealed.

It is understood that an argument developed between Barnett and Wright, who are said to be cousins, about food that he was allegedly taking from her stall. Wright allegedly confronted Barnett about it on the weekend and the issue appeared to have been resolved.

News of the deaths of Wright and her children, Kimanda Smith, 15, Sharalee Smith, 12, Rafaela Smith, five, and one-year-old Kishawn Henry Jr, dampened the spirits of residents in the peaceful north-central Clarendon community. According to Wright's landlady and neighbour Gwendolyn Edwards, 88, she was a very responsible and punctual person who did not deserve such a gruesome death.

"In all my life, mi never see or hear anything like this before. From morning mi tun fool after mi hear the news. It is a wicked act to kill a nice and decent young girl like that. A young girl who don't trouble no one, all she ever did was to be kind to people. She never gave me any trouble whatsoever since my husband rented her the house. She is very, very decent," Edwards remarked.

It is believed that Wright, who was studying to become a nurse, was helping out her cousin by giving him a place to stay. Barnett was apparently not well liked by several persons in New Road, despite being there for close to a year. According to a neighbour who requested anonymity, Barnett always had what was considered a spooky look on his face when he would often just sit idly on the verandah to watch the flow of traffic along the nearby main road.

"Anytime mi go a the shop and see him mi only say 'Good morning' or 'Good night' because fi him face never look pleasant yet. Mi spirit never tek him from day one," she said.

Distraught, and unable to make sense of the tragic news that greeted him at work, Kishawn Henry Sr, Wright's common-law husband, said he felt lost when he spoke to our news team.

The Jamaica Defence Force soldier cut a dejected figure while he received on-the-spot grief counselling from Reverend Carlton Tulloch, who is the chaplain for the police's Area Three Division. "How? Why?" he questioned as he struggled for answers.