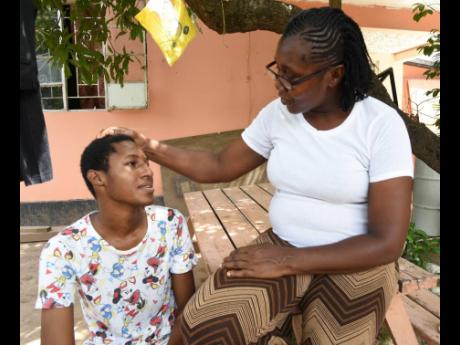 Dawnette McFarlane with her son Giovanni, who has benefitted from a scholarship. 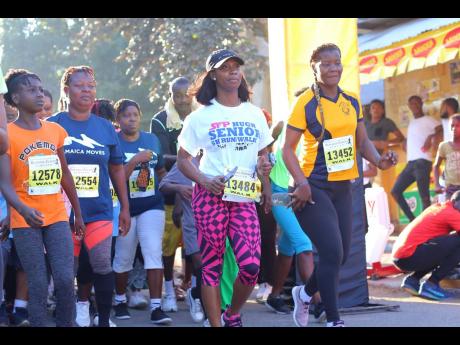 Sprinting star Shelly-Ann Farser-Pryce (second right) gets going at the start of the inaugural SFP/Hugh Senior 5k Run/Walk in 2018 in Waterhouse, St Andrew. 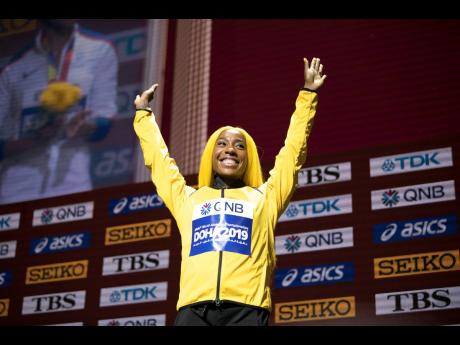 In 2018, Olympian Shelly-Ann Fraser-Pryce hosted the first SFP Hugh Senior 5K Run/Walk event to honour her late pastor of the Penwood Church of Christ in her beloved Waterhouse community of St Andrew.

The proceeds from the event went to families of children in her hometown to cover their educational expenses. The mother of one recipient, Dawnette McFarlane, told THE STAR that before she received the scholarship last year, she and her husband, Dave, who is a carpenter, were worried about how they would pay the school fee for their son Giovanni, as times got tougher once COVID-19 reached Jamaican shores.

"We really needed the help for school donation. It has been very helpful because the coronavirus and unemployment was making things very difficult," said McFarlane, a resident of Varma Road in the community. She agreed that the initiative has been a blessing for many parents who cannot find money to properly support their children's education.

"In Waterhouse, the parents are not well-off like some people and most of us have more than one child. The scholarship helps with a lot of things and it is not just to get books for the children. I used the scholarship to cover his school fee and books," she said.

McFarlane said that Giovanni, 16, who attends Jose Marti High School in St Catherine, has not squandered the money and is making huge strides in his studies that he hopes will lead him into a successful career as an architect.

"My son is quiet and he loves school. He is dedicated to his schoolwork and that is what I am happy about the most. He is in 10th grade now and is doing very well. He is a big fan of Shelly-Ann and whenever he sees her, he smiles. He loves her and he was happy to know that he got the scholarship from her," she said. "He wants to be an architect. So now he is doing mathematics, English language, geography, physics, furniture and building, [and] AutoCAD [computer aided design]," she said.

Our news team was visiting Fraser-Pryce's hometown on the eve of another World Championships appearance. Like most people in Waterhouse, McFarlane said she is eager to see the multiple Olympic gold medallist and World Champion perform.

Fraser-Pryce, 35, will be vying for a fifth gold medal in the women's 100m event at the 2022 World Championships in Eugene, Oregon, United States, between July 15-24.

"We know that she will be winning her race. We are sure of that, so everyone is just planning to scream again for her," said McFarlane, whose face lit up with excitement when she recalled the first time she got a glimpse of Fraser-Pryce's talent in 2008 at the Olympic Games in Beijing, China.

"I remember when she won her first 100m gold and she jumped up and punched the air and started to scream. I was at home watching it on TV and I was screaming also until my throat started to hurt, but I kept on screaming," she said.