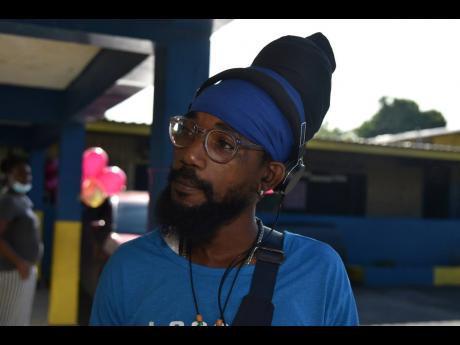 Wesmore Spencer spent a year in hospital after he was shot 17 times when he was a teenager.

Wesmore Spencer was only 16 when his life almost came to an abrupt end in 2006. He was shot 17 times, which resulted in a year-long battle for his life on a hospital bed.

In the aftermath of his near-death experience, the now 34-year-old single father said he is using the ordeal to guide him as he attempts to raise two children in the gritty St Andrew community of Olympic Gardens.

"Mi grow inna garrison, enuh, so mi know the garrison. Mi eat, sleep and slave inna di garrison, enuh, so yuh see a man weh out of him youth life in the garrison is a serious threat that to him youth. For example, a youth growing up not seeing his father, yuh know wah can gwane deh so? Him can get expose to all sorts of things -- corruption, abuse and gang violence -- and next thing you know him waah tek up the gun thing," said Spencer.

The up-and-coming recording artiste, who uses the moniker Silva Stone, said he was a typical unattached teen growing up in Bull Bay, St Andrew.

He said that not having a positive male figure in his early life contributed to him becoming susceptible to various negative influences. He said that he associated with the wrong crowd and nearly lost his life as a result.

"A four months mi unconscious fah inna hospital. Mi get shot all over mi body -- inna mi neck, legs, hand, and near mi testicles. Di shot inna mi neck, the bullet fly through it one inch away from mi windpipe. Doctors did believe say mi never did a guh mek it due to how mi did mash up," Spencer told THE STAR.

After getting a new lease on life, the high school dropout decided that he would use his near-death experience as an eye-opener. He steered far of negative influences and has vowed to be the best father he can be to his two children.

"Everything weh inna badness mi can tell yuh bout, memba that. Now how mi fi know these things and how it can mash up youths future and neglect mi son and mi daughter?," Spencer said.

He continued: "Listen, a me alone have dem from them likkle a grow because dem mother run weh gone leave dem, but mi decide say mi cyah mek my youths struggle like how mi grow up a struggle without a father figure around fi show mi right and wrong."

He now plays an integral role in his children's development both inside and out of the classroom.

"As a parent yuh wah fi live til yuh old and grey up so that you can see your children grow and become something good in life," he said.