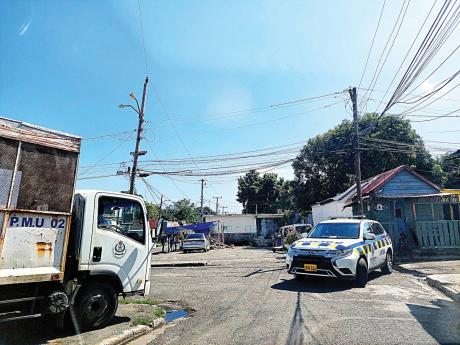 Police maintaining a presence in the Craig Town Area of St Andrew where two brothers were murdered on Sunday.

About 20 minutes after promising her brother that she would reserve some of her Sunday dinner for him, Rayma Lyons received disturbing news via telephone that left her in a state of shock.

Her brothers, Richard and Garth Lyons, had been shot as they sat talking under a tree at 31 Slipe Pen Road in Kingston.

Garth, 42, who had returned home three months ago after serving a 10-year prison sentence, died at the Kingston Public Hospital (KPH) while being treated. The younger sibling, Richard, 31, also known as 'Duduman', who was expecting his first-born in December, died on the spot.

"Not even 20 minutes good him come out the house and go outta road mi deh yah a cook and hear the whole heap a gunshot dem. Di only thing mi coulda say was, 'Wonder if me brother dem alright', because mi know dem love siddung over deh. That's the only thing mi could a say, and as mi tek up mi phone a so one youth say yuh bredda dem dead," she recalled.

"A me and dem grow, we close. Wi eat and drink outta one plate, everything. Duduman baby girl fi born inna December, and him very excited over it and a yesterday Garth ask mi fi some dinner and mi tell him say it soon finish, a just the meat kind mi a wait fi done," she said.