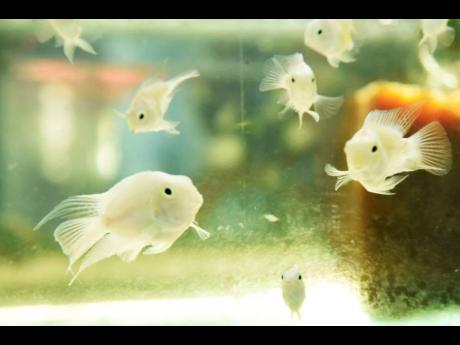 Photos by Nicholas Nunes/Photographer Some of the ornamental fish in Mattis’ tank. 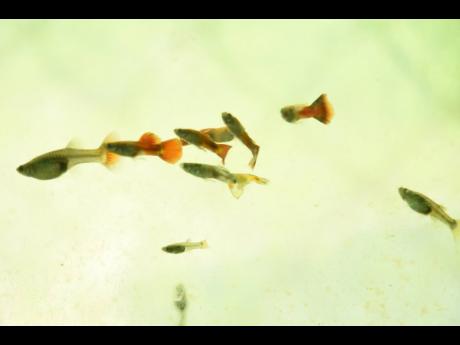 A school of guppies. 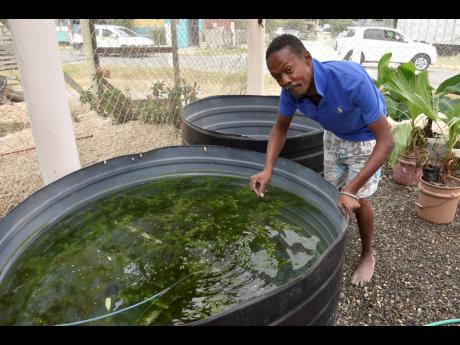 Leon Mattis at his fish farm and landscaping business. 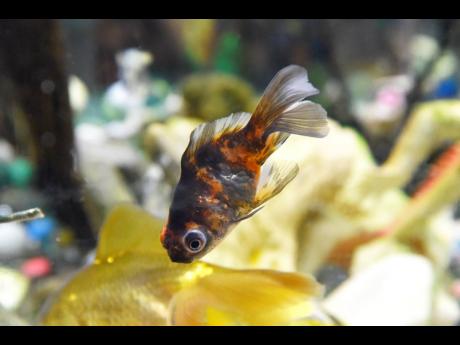 This curiously coloured goldfish is among the different species that Mattis has.
1
2
3
4

Despite living with a physical disability that hinders his movement, Leon Mattis has not let that stop him from turning his love of fishery and landscaping into a business.

The 45-year-old is the proud owner and operator of an ornamental fish and plant farm called LMC Super Fish World and Landscaping in Seaview Gardens, Kingston 11, for nearly two decades.

"We do everything here suh as it relates to pet fish, and by next week, mi a guh have the fish dem weh can eat," Mattis said.

Mattis' ornamental fish farming journey started after he lost his job as a newspaper vendor.

"Mi then girlfriend say mi can't just stay home suh and mi need to find something do with mi time because mi have a lot of skills. Mi did have a little fish tank in the house but mi father find every reason to bring an argument about the tank. So mi go rent a room fi store di tank," he said, adding that he eventually lived in the room with the pet fishes.

In the early 2000s, he decided to get certified in aquaculture at the then HEART Trust/NTA. But his vision to start a fish farm in Seaview Gardens was not immediately welcomed by everyone.

"There was this one particular person who pushed me to do this because she tell mi say nutten couldn't make out here suh. But is a pity she die before she could even see it. There are a lot of people at the time who discouraged me, but mi focus on the good part of it. Once mi focus mi brain on something constructive, it can happen," Mattis said.

With the assistance of Anthony Hylton, member of parliament for St Andrew Western, Mattis was able to legally secure the spot from which he now operates his business. With revenue from his small business and help from a few sponsors, he has constructed a more modern farm, which consists of ponds and tanks.

Mattis raises and sells a variety of ornamental fish. He also spends a lot of time tending to his plants.

"A nuh every day people turn up, but when dem do, mi nuh have enough hands to sell fish. Believe it or not, pet fish in very high demand enuh, and people from all walks of life come buy. Mi also have customers weh mi maintain dem tank sometimes and then again mi make fish tank too, and mi nuh just make regular fish tank," he said.

"Mi have a one tank weh tour the 14 parishes and win all type a sitten. Some a di tings dem weh in deh a weh mi win a awards and some weh mi take away from the kids dem in the community. If mi see dem wid all a little plastic crocodile a frighten di next one, mi take it," he added.

Mattis said that some of his biggest supporters come from his community. He said praedial larceny is not an issue for him.

"Mi all go buy fish a country and left the door open and nutten nuh trouble. A nuh one or two time and that a the support weh mi get from community members. The police dem look for me too, and that kinda encourage mi," he said.

Although he is disabled, Mattis said there are no barriers that he cannot break down, something he's learned while growing up with his disability.

"Mi never grow soft suh nobody couldn't take mi fi fool. When mi a go Norman Manley High mi have a form teacher who tell mi say mi can do anything and don't let my disability stop me," Mattis said.

Mattis said that he is looking forward to opening a kitchen from which he plans to sell seafood dishes.