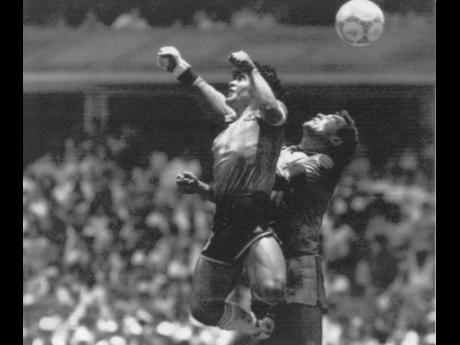 In this June 22, 1986 file photo, Argentina's Diego Maradona (left) beats England goalkeeper Peter Shilton to a high ball and scores his first of two goals in a FIFA World Cup quarterfinal match, in Mexico City. This goal has gone down as the "Hand of God" as Maradona used his left fist to knock the ball past Shilton. 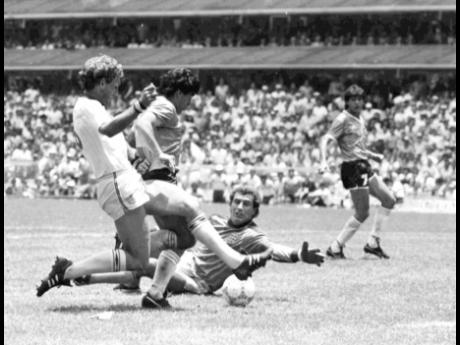 In this June 22, 1986 file photo, Argentina's Diego Maradona (second left) is about to score his second goal against England, during their FIFA World Cup quarter final match, in Mexico City, Mexico.
1
2

Diego Maradona scored one of the most underhanded goals in World Cup history in 1986. It's known as the "Hand of God."Argentina was not a one-man team at the tournament in Mexico, but Maradona made it look like it was. That was especially true in the quarter-finals against England, when he scored one of the game's greatest goals as well as one of the most controversial.

Standing at 5-foot-5 (1.65 meters), Maradona had a low centre of gravity allied with exceptional strength, a combination that allowed him to wiggle free from opponents in a flash.

After his disappointment at the 1982 World Cup in Spain, where he was sent off in Argentina's final match against Brazil, Maradona turned up in Mexico with a heap of pressure on his back.

It was clear he was one of the most talented players in the history of the game, but to be bracketed alongside Pele as the best ever, he surely needed to win the World Cup.

Perhaps no player has ever dominated a World Cup as much as Maradona did in 1986. That was evident at Azteca Stadium where Argentina met England in their first match since the 1982 Falklands War.

This was the match that cemented Maradona's complex reputation.

Early in the second half, Maradona scored his first goal. England defender Steve Hodge intercepted a pass and flicked the ball back toward goalkeeper Peter Shilton. But Maradona, who had made his way into the penalty area after the previous attack fizzled, leapt up and got to the ball before Shilton. The ball somehow trickled into the net.

Later in the match, as if intent on showcasing his incredible potential, Maradona picked up the ball around the halfway line and toyed with the English players. Through a myriad of dribbles, feints and sheer body strength, he scored what many consider the greatest individual goal of all time.

Despite a late fightback from England, Argentina held on to win 2-1 and made the semi-finals, where Maradona scored another fantastic individual goal against Belgium.

In the final, West Germany contained him up to a point.

After coming back from 2-0 down, West Germany was looking strong. However, with minutes to go in regular time, Maradona threaded a pass through to Jorge Burruchaga, who calmly slotted it past goalkeeper Harald Schumacher to secure Argentina's second World Cup victory.

Maradona would have more highs and lows in his career, but his exploits in 1986 will forever seal his status as one of the greatest players of all time.