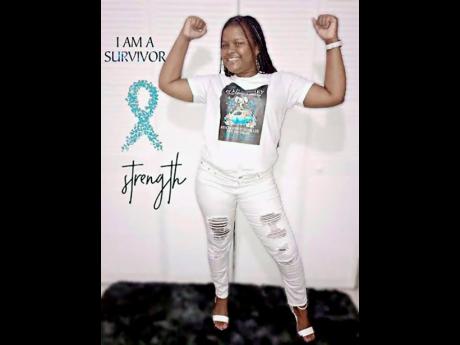 Currently an intern at the May Pen Hospital Hospital, the 25-year-old says she is hoping that her story will inspire others who are battling cancer.

McKintosh, who hails from New Bowens in Clarendon, said in 2012, she removed a non-cancerous cyst from her ovaries and maintained good health until late 2018.

"I was gaining a lot of weight and my lower abdomen was stiff. I didn't take it for anything so it was the March that I went to see my doctor and he said to me that 'I hope you are pregnant because if it's not that, it's something way worse'," she said.

McKintosh, through a pelvic examination, discovered that she had a huge mass on her ovaries that had spread to her stomach.

Last April, she did an operation to remove the mass which was sent to a lab for testing, after which she went back to school shortly after to sit her examinations.

"The day I did my final exams, I was feeling some pain that I had never experienced before. But I sat in that room and told myself that I must complete it. I failed one of the three exams but I was really happy that I had passed two, knowing what I was enduring at the time," she said.

McKintosh said on the way to the University Hospital of the West Indies (UHWI), she could sense that the results would not be what she had hoped for, but tried to remain as optimistic as possible.

"The day I was going back to UHWI for results, I just told myself I was leaving everything in God's hands. The doctor told me that I had a rare type of ovarian cancer and it was stage two. I heard what he said but I wasn't worried. When I came out the doctor's office, I told my mom I was hungry and she asked how I could think about food after the news we just received," she laughed.

McKintosh said she did three rigorous cycles of chemotherapy, which saw her shaving her head. But the cancer advanced to stage three.

"I love my hair but I remember the day when it began falling out and I cut it. I made a video of me dancing and sent to my grandmother. That is just the spirit that I have and even when I was in severe pain, I tried my best not to feel sorry for myself because I knew that this couldn't last forever," she said.

With the disease in remission, McKintosh told THE WEEKEND STAR that she looks forward to becoming a registered nurse and continues to encourage persons not to lose hope.

"Faith can move mountains. We are all humans so just have faith and trust in God. It's hard being diagnosed with cancer but just don't let it control your happiness," she said.