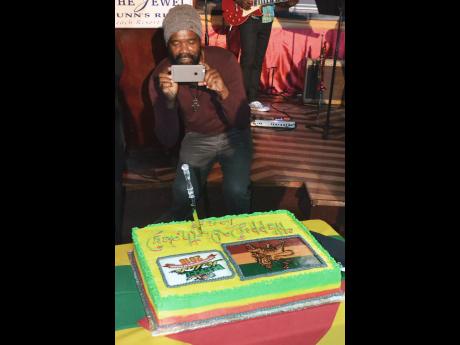 Twenty-three years and still going strong, Rebel Salute had its St Ann international media launch Wednesday night at Jewel Dunn's River, the venue that has hosted the launch ever since it moved to the Garden Parish in 2013.

It was basically to say everything is in place for tonight's start, and to give those in attendance a taste of what is to come for two nights at Grizzly's Plantation Cove in Priory. The taste, in the form of wonderful performances from Davianah, Ernie Smith, Tony Gregory and others, was enough reason for the audience to be in attendance.

Several other entertainers were present, although they didn't perform, and included Macka B, The Congos and Little Hero.

Jewel Dunn's River added a touch of class to the event, presenting birthday boy, Rebel Salute promoter, Patrick 'Tony Rebel' Barrett, with a cake beautifully decorated in red, green and gold with the image of a lion and the show's logo.

Endorsements came from the St Ann Parish Council with Mayor Desmond Gilmore giving the thumbs up for the parish hosting the event, and the Jamaica Hotel and Tourist Association (JHTA) with Area Chair for Ocho Rios Runaway Bay Chapter, Vana Taylor, giving a ringing endorsement.

Assistant Commissioner in charge of Area Two, Glenford Hudson, ensured professional conduct from the police and said his team will be sensitised as it relates to the Herb Curb and the issue of marijuana.

Director of Sales at Jewel Resorts, Charmaine Deane, recognised the support that the event has garnered not just from the hote,l but from the wider community, saying Rebel Salute now has an official home in St Ann. Deane indicated the resort chain's continued support of Rebel Salute.

Director of Organic Heart, producers of Rebel Salute, attorney-at-law Jahyudah Barrett, in expressing her appreciation for the support that has come from St Ann, pledged "many, many more" shows at the venue, while promising another memorable event for 2016.