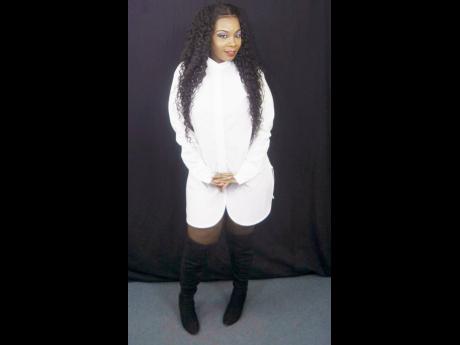 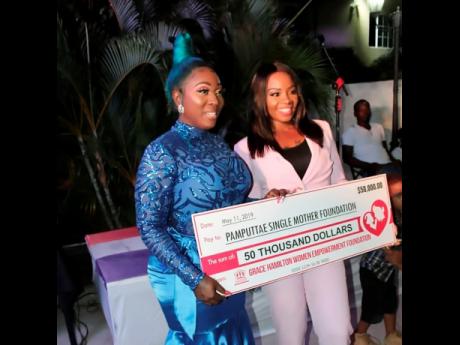 Pamputtae (right) accepts a symbolic cheque of $50,000 from Spice for her Single Mothers Foundation at the launch last Saturday.
1
2

Dancehall artiste Pamputtae is today overwhelmed with emotion after receiving an outpouring of support from her female colleagues at the launch of her Single Mothers Foundation last Saturday.

Held at C&C South Beach Cafe on Brompton Road in St Andrew, the launch was attended by a number of female artistes, including Spice, Raine Seville, Stacious, Shauna Chyn, Abby Dallas and Alaine.

Pamputtae told THE STAR that she was taken aback by the turnout at the event. She said that the number of female artistes present stood as a testimony that unity does exist among females in dancehall.

"Me nah tell no lie, to see so many of them turn up, me did feel good. I feel proud of myself from where I'm coming from with this foundation to getting it where it's at now, and I just want to tell all of them thanks. I love the unity because unity is strength. Dem always a say the females dem don't live good and stuff like that, but real know real, and they turned up for me and the foundation, and me grateful for that," she said.

Pamputtae said that in addition to turning up, her colleagues showed support by donating to her foundation in cash and kind. She revealed that fellow entertainer Spice donated $50,000 to the cause through her Grace Hamilton Women Empowerment Foundation. She said the acts of kindness will only further strengthen her mission as she looks to positively impact the lives of other women.

"This foundation is all about women strengthening women. When I released the Single Mothers song, I realised there were a lot of women out their struggling to make ends meet. And as someone who is coming from that place, I wanted to do something to help, and so I started this movement," she said. Pamputtae also revealed that aside from monetary donations, the event was well attended, and money was raised from the $500 gate contribution. She said that with the school year coming to an end and many mothers already thinking about back-to-school expenses, she hopes to use the proceeds from Saturday's launch to help a few mothers pay their children's school fees and buy much-needed school supplies.