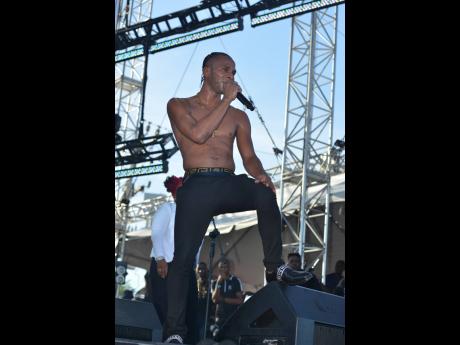 Dexta Daps was on a mission to please his female fans. 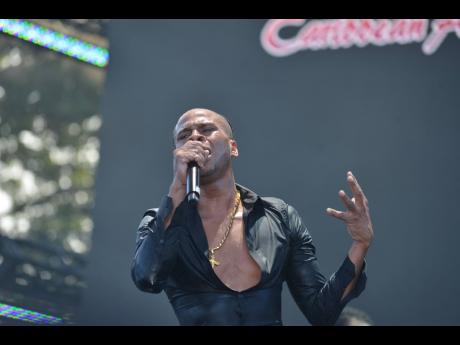 Dripping with sweat, Dexta Daps thrilled the audience with songs from his catalogue.
1
2

Dancehall's heartthrob Dexta Daps turned in a sultry set on Festival Night One at Reggae Sumfest over the weekend, cementing his place as the ladies' favourite male entertainer.

Performing songs such as Owner, Cheat On You, Me See Mi Bed And Miss You, as well as his latest hit, No Underwear, the 'Dapper Don' had the female patronage inside Catherine Hall, Montego Bay, completely hypnotised by his performance. It was non-stop screaming from the moment he touched the stage until he ended his set in the wee hours of Saturday morning. And even after his stipulated time had come to an end, the women could not get enough and begged the MC for an encore performance. The singer obliged and returned to the stage to polish off an already-captivating delivery.

Well aware that he is considered a male sex symbol in the entertainment industry, the artiste told THE STAR that although the label is not something he aspired towards when he began his career, it is one that he embraces wholeheartedly.

"Yuh know say that (sex symbol label) a just something weh the people proclaim, and me just run wid it," he said, laughing.

"If di ladies dem consider me to be one, who am I to complain? Me just a use it fi continue pleasing them and giving them what they want. They enjoy me like this, so this is who I am. I embrace it."

The entertainer also revealed that he is often motivated to turn in strong sets based on the reaction of his female audience. Defining them as the best crowd an artiste could ask for, Dexta said that once he satisfies his core fanbase on any show, he is always happy with his delivery.

"When unuh gwaan so, me haffi jump and gwaan wid a bagga things because energy is real," he said.

While his female following may not mind his provocative performances, Dexta has come under fire in recent times based on how he sometimes interacts with female fans onstage.

Not fazed by backlash

Speaking on the backlash he has received over the past few months for videos circulated via the Internet of some of his raunchy sets, Daps said he is not fazed by negativity.

Me nuh even give dem people deh the time of day because a dat dem want - the attention and the back and forth, that's why them even think negative in the first place," he said.

"Me nuh see nothing negative bout weh me a do. A how me and yuh born?

"At the end of the day, this is dancehall, where people are free to express themselves how they want to."