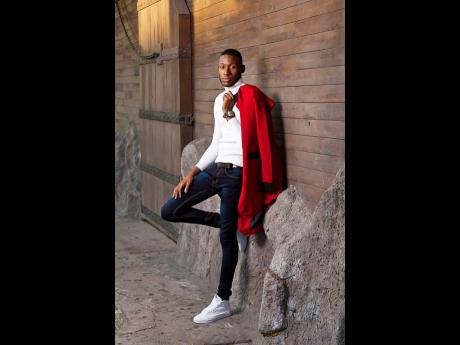 Two years ago, singer Adrian Morris, known as Adri Morr, was on a direct path to making a name in the gospel music industry.

However, the passion he had to write and record other genres of music lingered with him.

“I am a lover of music, particularly the pop genre, and I have always wanted to explore the style and flow of it. It could be said that it is something I saw myself doing even before singing the gospel,” Adri Morr told THE WEEKEND STAR.

He shared that gospel music has always been second to none when it comes to expressing his emotions and finding peace and that while he could easily combine gospel and pop to create memorable tracks that speak to the spirit, he refuses to do so.

“I don’t have any wishes to mix the genres; I believe it is better to set a foundation in one or the other before I try anything else,” the 27-year-old singer expressed.

His gospel career, however, did not take off as he thought it would.

He said, “The bookings were slow. As a matter of fact, it was like I had to beg to be part of shows to share in the ministry. The music, also, was not getting as much traction.”

With a new focus, the singer’s latest single, Feelin’ So Good, has been met with mixed reviews. Not only is it a pop song, but it is inspired by a crush Adri Morr developed and still has on a female friend.

“Even though the lyrics are not suggestive, and even though the negative feedback is less than the positive, they tend to outweigh the good reviews on social media because of how the persons put it out. Some of the reactions make me laugh; when I was promoting the gospel music, there were little to no comments. I have no regrets doing gospel, but I also don’t regret changing my focus to pop, either. The feedback means people are listening,” he said.

He has not given up on gospel music yet, but for the next few months, he plans to use all of his energy to drive the promotion of Feelin’ So Good and make preparations to put together a music video for the track.

“The radio plays locally have been climbing steadily since its release a couple of months ago, and I have accepted that as listeners continue to find out my current direction, they will say different things. My desire to take my career to the next level is very strong, and I won’t break for anything,” he said.