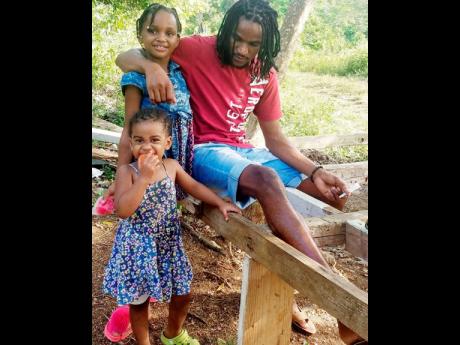 Recording artiste Lee Dann has gone viral on several occasions for the love and care he provides for his children.

In an interview with THE STAR early last year, the single father of two daughters said his girls are his biggest source of motivation.

At the time, he said that even after putting in more than a decade of work in the industry, he was yet to receive his big break.

Today, nothing much has changed for the entertainer. He told THE STAR that he's still not getting the support he thinks his music deserves.

"It has caused a kind of strain on my career. I have been working as hard as ever, with more than 20 songs out, several mixtapes and music videos, but is like Jamaica still a sleep pan me," he said. "Jamaicans seem to hate positivity, and that's what I bring. They seem to hate you for telling the truth, showing love, and telling them to live good. Mussi chu me bring so much of that message in my music why they don't like it."

He continued: "Me see all a di gully bat dem. The Mackerel and the rest a Internet sensation get dem buss and can feed dem family and dem a run things. Dem get shows, and thing, and me as a single father weh have more talent dan all a dem combined and a do music because of the passion, nah get the same love. It sad." Lee Dann said he was not jealous or 'bad mind' but "fair is fair".

"Mi talented, and me put out so much good music, and mi invest everything in this. Me is a very hard-working yute. From the day me start music, me never stop yet, so when me asking people for music support, me nuh think it hard," he said.

But even as he laments a lack of support locally, Lee Dann says he has no intention of giving up. Currently, he's promoting the singles Rich Quick and One Day.

I want to do the music videos for them, but things are tough, and I don't have the money to do them, but I'm going to keep fighting. I have two wonderful daughters to care for. Right now me deh home a homeschool like a principal. My daughter dem bright, and so giving up is not on the table for me," he said. "Me nah stop this. Right now if music a go over one cliff, me a go over wid it."