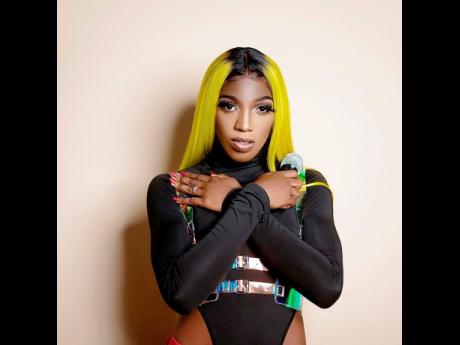 Footage taken from a recent Instagram Live session, which shows a young woman performing oral sex on a sex toy to the beat of her song Sexy Moan Remix, has inspired the concept for Tallup's next music video.

The dancehall artiste told THE WEEKEND STAR that she wants to hire an actress to re-enact the steamy live footage as she believes it will create the buzz she needs to get the song the attention it deserves.

"A somebody tell me bout the girl and say she just gwaan wid a bag a things to me song pan her IG (Instagram) Live, and me go over deh and see it fi miself. Me nah tell no lie, it did kinda shock me because a di first me ever witness sumting like that pan mi song. Mi never know people woulda take the song to da level deh, but me nah knock it," she said. "It gi me a brilliant idea fi di music video for the song. Me nah go use the exact video from the live video, but I'm going to get someone to act out something similar and use it because me realise people love things like this. Di amount a people weh screen record the girl live and send to me. Me hear say all Pornhub it reach."

Tallup says that although she is certain that her decision to go raw and raunchy on the visuals will be met with a ton of harsh criticism, she will not let chatter deter her from entertaining her fans.

"Of course me concerned bout wah people a go say, but entertainment a entertainment. Is not me in the video, and all the video was showing was that certain people like certain things, and dem nuh fraid to show it, and Sexy Moan is a song weh me and Knaviicon do to encourage people to embrace their sexual side," she said. "Yuh have some woman weh brave and brawling, and me nah bash a next woman fi her lifestyle, or whatever. I just see me using it as grounds for my music video as me being creative, and me know it a go draw a lot of attention wid the controversy."

Tallup said that she wants to drop the video by July.