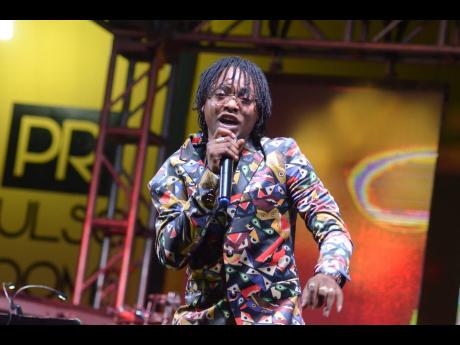 Several members of the dancehall fraternity are today remaining hopeful that their colleague, Rygin King, will pull through after being attacked by a gunman on Sunday.

The entertainer, who underwent surgery, remains in the hospital today in what THE STAR understands is serious but stable condition. Sashalee Blackwood, 28, was killed and a 25-year old male was shot in the leg.

As news of the gun attack spread on social media Sunday afternoon, timelines were flooded with pictures of the entertainer in happier times as his colleagues sent up prayers on his behalf.

Jah Cure, Queen Ifrica, Beenie Man, QQ, Macka Diamond and D'Angel were among the acts to extend well wishes to the entertainer.

In a post made to his page on Monday, Jah Cure used the words of one of his most popular tracks as his prayer for the injured dancehall artiste. "Father we seek your blessings. Every day your children cry. Although some of us are missing ... Bestowed life upon I and I. Jah will never give us more than what we can bear! I'm with you soldier until the end," he captioned a photo of himself and Rygin King with Romeich Major and Gyptian.

Queen Ifrica, in her post, said she was saddened at the state of the country even as she urged Rygin King to live.

Addressing the entertainer as his brother in his comment under the last post made by Rygin King's official Instagram page, Kingston declared that 'no evil shall prosper'.

The Corporate Communications Unit of the Jamaica Constabulary Force told THE STAR that no additional information was available at the time.