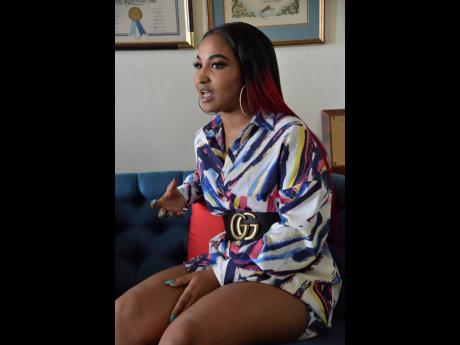 While the majority of social media users were sending well wishes and condolences to dancehall princess Shenseea following her mother's death, some accused the entertainer of offering up her mom as a 'human sacrifice'.

But in an hour-long Instagram Live session on the weekend, the entertainer addressed those rumours, labelling the persons harbouring those thoughts as "sick".

"Social media, in case unu never notice, is a thing weh me use a lot. It's my biggest platform. I use it to promote myself and my music and help me get weh me deh, but there are things that you can never get me to do, which is get angry over comments. But in a time like dis when me mother dead and unu come a talk bout sacrifice, that show mi say a devil himself send unu come. Mi neeven fi get worked up over that, but mi need unu fi know say as well that I really can find you," she said. "All who weh a talk say me sacrifice my mother, unu sick. Sick, sick, sick, sick."

Despite the negative energy from some, the entertainer said she is happy she shared her mother with her fan base.

"I know that just me sharing her and my son, not only did it put a smile on my face to see my family happy, but I know it made a lot of my Shenyengz happy as well. I get a lot of messages from people saying we cheer you guys up when unu in a bad mood," she said.

Shenseea used the majority of her session to talk about her mother and the bond they shared.

"Mi tell all a mi fren dem say 2019 was one of my best years and worst years in one, because I lost my voice and I had to cancel so many of my shows. But this year, everything weh happen fi dis year, COVID and dem thing deh, me tell mi self say me nah make no plans fi 2020; 2020 a now the worst year a mi life," she said.

Despite still trying to cope with her mother's death, Shenseea says she is happy she got to show and tell her how much she loved her.

"The fact say him (God) bring her back show me say him a look out fi me on a real. 'I love you' was one of the last things I said to her. Mi nuh affi tell unu how much me did love my mother, unu did see dat ... mi just disappointed say mi just a start really show her life," she said.