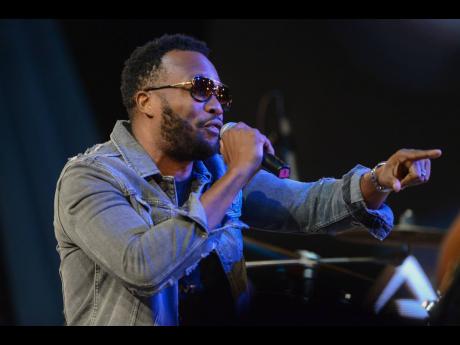 As one of Jamaica's leading entertainers, dancehall artiste Agent Sasco fully understands the importance of going on stage and giving of one's best to the crowd.

He said that as an entertainer, an artiste's output during a live show is inextricably linked to the energy the receives from the crowd.

Still, even with that connection established, Agent Sasco believes that artistes could benefit greatly from the absence of that artiste-audience energy exchange.

He told THE WEEKEND STAR that with the big stage shows now having to turn to the virtual space, artistes may be forced to kick things up a notch as far as live performances are concerned as they are no longer taking their cues from 'forwards'.

"These (virtual shows) might be a very good thing moving forward for performances in general. As an artiste, you are supposed to have fun on the stage, and from my observation, one of the things that was kinda holding back live performances in our culture was the 'forward' mentality. The idea of a forward did a mek the music go backward because too many artistes were working towards a forward and not necessarily making sure they give their best performance," he said. "Now that we're on a virtual stage with no audience, it forces performers to now get into the performance for themselves, and if the forward happen, it's a bonus, a brawta."

Agent Sasco said that he learned early in his career that getting a forward didn't mean you were connecting with the people. He recalled his first Reggae Sumfest performance in 2003.

"Somebody videoed the show for me, and I got a copy. It was an okay performance. I mean I did all right, but watching the DVD, I noticed someone standing close to the stage, taking in my performance. He was just standing there, smoking and just watching the show. I performed for 15 minutes, and about eight minutes in, he took a draw of whatever he was smoking, blew it in the air, and said, 'Da yute yah bad, innu. Him a go come lock the place'," he recalled. "Now, him never put up him hand one time, never buss nuh blank, never bawl 'forward' or tun on nuh lighta, and by any measurement, if everybody was like him in the audience, people woulda talk say, 'Bwoy, dem stand up pan Assassin (his stage name at the time) a Sumfest."

He continued: "From that experience, I got to understand that sometimes getting a forward is not everything because you have people watching you and taking notes minus the excitement. So as an artiste, yuh affi perform even when it seems like the crowd stand up pan yuh."

Speaking of the importance of putting on your best show at all times, the entertainer said that it is also imperative that artistes learn to "show up and show out" irrespective of the time they are scheduled to perform.

Agent Sasco, who acted as this year's closing act at the virtual staging of Reggae Sumfest, said performance time, although holding cultural significance in the industry, should not bear so much weight.

"The management team that I started out with at Penthouse Records, it was a blessing learning a few things coming out of that environment, and one of the few things that I discovered was that whenever your name call, go and perform. It has always been like that for me."