‘She is the future of music’ - Expectations high for starlet Octavia 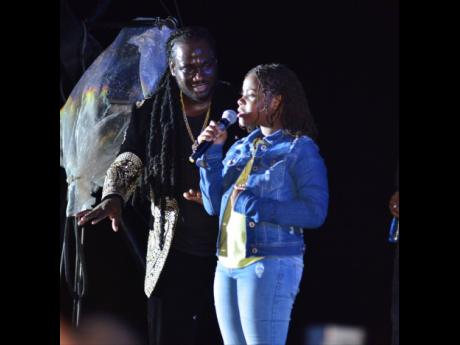 I-Octane performs with his daughter, Octavia, during Rebel Salute at Grizzly’s Plantation Cove in St Ann.

After releasing her debut single Internet months ago, I-Octane's daughter, Octavia, is getting ready to drop her first music video.

The visual will be for the recently released single Escape, a collaboration between herself and labelmate Banxx.

Speaking with THE WEEKEND STAR about it, Octavia revealed that she came up with the concept for the video in a dream.

"I am really excited for it to get out there. After shooting and I went home, I was just like 'OMG, I want to see the video right now," she said. "That whole experience was shockingly good. I was super shy to do it at first but then my mom came on set and I built up confidence and aunty Sasha was there trying to get me moving and to just go with it and then I just started having fun. I forgot that I was even on set at that point." The video is slated for release in the next two weeks and publicist Sasha Bling says it will be the beginning of great things for Octavia.

"One of the things people need to know about Octavia is that she is more than just dancehall and reggae. She is the future of music. What she loves musically is the weirdest stuff. Her favourite artiste is Melanie Martinez. She is the new kid on the block and anything yuh hear, that is not even half of who Octavia is. She is at the beginning stage of her thing and she already giving people goosebumps," she said. "Producers are reaching out for her and it's crazy. They want her on the riddim with the big artiste dem because dem a say she too bad. Still, we're just being very cautious because we don't want to put her out there on the wrong kinda stuff because of her age. Her father is gonna drop an album to and she's on the album as well."

Spewing confidence, Octavia says she understands that everyone won't like her.

"So for the people that do, you just go with them. I have confidence in myself and that comes from my heart, mostly. It also has to do with the support I get from my mom, daddy, aunty and all my relatives and friends," she said, recalling an incident where a random person recognised her while she was in the grocery store with her mother.

"It was really surprising but it felt good. When I did my first song, I was like maybe I won't get so much attention but when I saw that one person just come up to me like that, that feeling was outta this world. The attention makes me want to work harder, do more songs, more videos and stuff," she said.