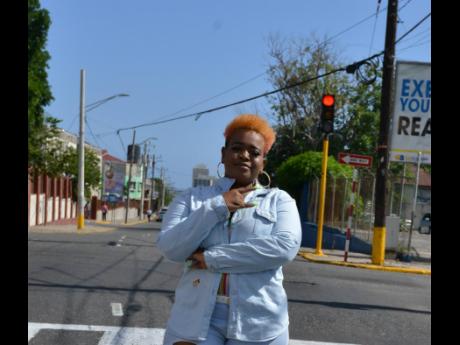 When dancehall princess Shenseea released her scorching freestyle earlier this month, the footage went viral, and some of the comments tagged dancehall newcomer, Bad Gyal Jade.

The artiste, who dubs herself the 'Freestyle pro', had done the 'Don't Rush' challenge in May, which earned her a huge endorsement from Bounty Killer. Today, the fact that her old video has resurfaced and has sparked new interest, has left Bad Gyal Jade overjoyed.

"Nuff people did a point out the fact say mi did murder di challenge from early 2020 and dat did make me feel good. Shenseea really did her thing on that freestyle and the fact that mine still made such an impression that they were tagging me, I was overwhelmed," she said. "I was one of the first to dominate that riddim. It reached so many ears 'til one a di time a it did a run off TikTok." Bad Gyal Jade even suggested that she and Shenseea could a freestyle together.

"Mi wouldn't mind at all. She is a really good artiste that I have seen [her] grow so much and mi really proud," she said.

Bad Gyal Jade is currently one of the frontrunners in a freestyle competition being run by dancehall artiste Aidonia. Dubbed the Dat Eazy challenge, Aidonia has been using his social media platform to uncover fresh artistes, as they spit original lyrics to his most recent single. The winners, one male and one female, will get the chance to collaborate with Aidonia.

Bad Gyal Jade, the 2018 Magnum Queen of Dancehall, told THE STAR that if she wins, it would provide a significant career boost.

"Mi really grateful for this weh Aidonia a do. I think he did a good thing with this because a lot of artiste out there weh nuh interested fi highlight young artistes none at all, so mi affi big up Aidonia when me see him do dis," she said. "A lot of people over him page run come follow me because dem never know bout me. And him a go all do a collaboration with the winners and that would be a big highlight for me. I would love that . That would be a big deal. It woulda boost ma career for sure."

Aside from freestyles, Bad Gyal Jade says she also has a new single out, Pan Di Side, a video for which was just shot.