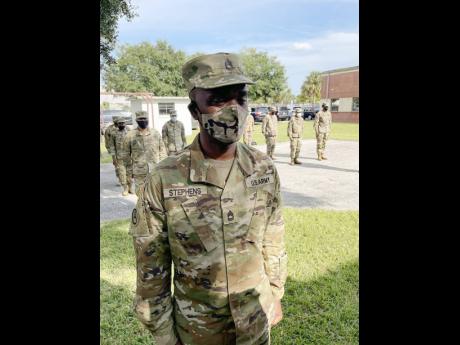 Contributed Rohan Stephens, known by his moniker Zumjay, stands at attention during a pinning ceremony over the weekend. 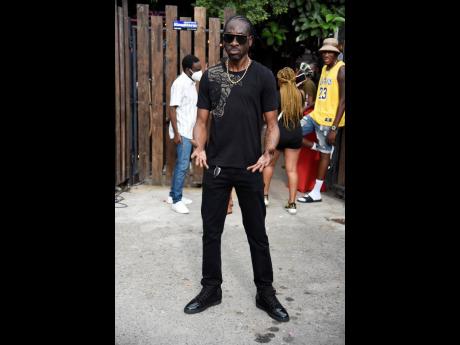 When recording artiste Zumjay announced that he was joining the US Army in 2008, he said there was backlash from fellow Jamaicans and several entertainers.

However, he said one veteran stood out as a "major motivator".

"Bounty Killer was the first artiste, after THE STAR broke the story 13 years ago, to offer some words of encouragement," Zumjay said. "He saw me at Uptown Mondays, and said, 'Zum, me hear yuh join the army and is a big decision and is a good move'. He was the one that said my decision is going to be significant in my development and in contributing to change in the world."

The Do Or Don't deejay expressed that persons, some of whom he called friends, tried to talk him out of his decision, saying "it was a death sentence".

"I got more backlash than a person can imagine with people saying me a go kill miself and how me gone fight 'white man war'. But lots of those persons that talked crap are still in the same place they were back then. I wanted people to see that I was securing freedom and democracy for all of us," he said. "From day one, Bounty Killer at least told me he was proud of me and encouraged me to aim higher and it felt good coming from a man of his status."

Last Saturday, Zumjay, given name Rohan Stephens, was promoted to the rank of Sergeant First Class, in a private ceremony on a US Army base, where his wife Aviesha Stephens had the opportunity to pin on the insignia. After enlisting, the dancehall entertainer pursued his tertiary education, using all the resources afforded to him through service. He originally enrolled in the Borough of Manhattan Community College to study for a bachelor's degree in audio engineering but was deployed to the Middle East not long after.

"I changed my majors a few times after I first had to put my education on pause. When I returned to the US in 2011, I enrolled in a different school, Saint Leo University (Tampa, Florida), which had a campus on the army base where I was stationed in Charleston, South Carolina, then pursued studies in business administration until I finally ended up completing studies for a bachelor's degree in psychology in 2016," he said. "I use my knowledge in psychology every day with my children, ha! I immediately enrolled into St John's University to do my graduate studies in criminal justice, which I completed in 2018, and that's another way the military has tested and taught me. I am now working in the field of government."

Bounty Killer said he was honoured for the gratitude Zumjay has demonstrated on social media and commended the fellow artiste by saying, "You did it yute, in shining colours bredda. Congratulations." Other entertainers, including Tanya Stephens, Bling Dawg, Cham, Aisha Davis and Tony Matterhorn, also extended their salutations under Zumjay's post on Instagram.