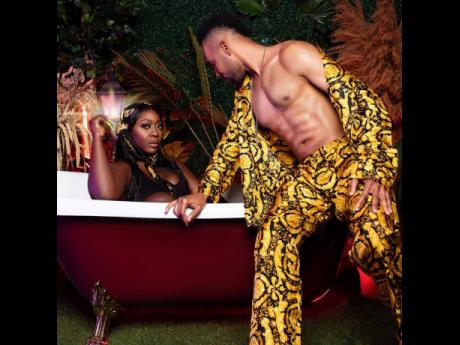 Cham and Spice on the set of the video for their song ‘Condensed Milk’.

Veteran deejay and actor Cham has remained a sex symbol in dancehall for almost three decades, and recently told THE STAR that he does not plan for that to change any time soon.

"I make music to make people feel good and sexy about themselves," he said. Referencing the momentous release last month of a collaboration with Spice titled Condensed Milk, Cham added, "I've never allowed anyone to dictate my direction musically."

The song is sexually stimulating and speaks to a woman's capabilities in bed and there's still much left to the listener's interpretation. The music video has over 600,000 views on YouTube and the song has 165,000 plays on Spotify alone.

"Music is fun and as you can see, the female fans are having crazy, sexy, fun with this song," he said.

The Vitamin S artiste made reference to the 'Condensed Milk Challenge' launched on Instagram on October 26. Persons entering must upload a video, which must include the song and incorporate the use of milk. The videos will be judged based on creativity, the use of dance, and the public votes they receive by the final round.

He said that he is not shocked by the number of entries or the extremes that the entrants have gone to in the videos to win the US$5,000 prize. Both Cham and Spice have shared videos on their Instagram accounts of females recreating scenes from the official music video for the track, doing dance choreography and also showing themselves in risque sexual positions. The winner will be announced on November 26.

What is shocking is that Cham only teamed up with the 'queen of stage' for the first time in 2021, although they have known each other for many years.

"Music is something you can't force, when the timing and the song is right you'll feel it naturally," said Cham. "Spice is my real sister and we knew we had to do this at some point. Now just happens to be the time. Condensed Milk has the potential to be a big record. We'll keep having fun promoting it then see where it goes."

In a press release, Spice said she was excited about the song.

"I've been a fan of his music my entire life and I'm sure my fans are gonna love this mega hit we got together. Every woman has always referred to themselves as being sweet so condensed milk can easily be related to," she said.