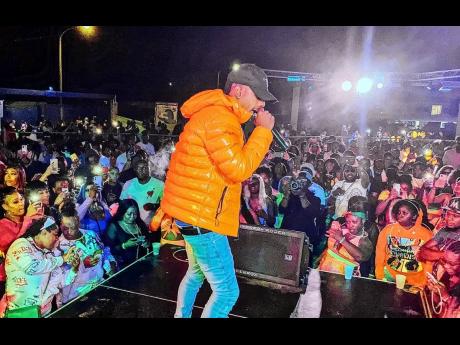 After making his debut on one of the biggest shows of his career last month, the 10th Anniversary of BRT Weekend held in the Florida Keys, dancehall newcomer 450 is preparing to return to the 'Sunshine State' to kick-start his first North American tour.

"The BRT Weekend is a major platform and I'm extremely grateful for the experience and the fans I have gained from it," 450 told THE STAR.

The timely invitation to perform at BRT Glow came from dancehall sensation Govana, but 450 said that he was "prepared regardless what the event would be".

He continued, "It's my job; my responsibility is to put out my best for the audience."

He said that following the spontaneous performance, his management team had been getting "an overwhelming amount of calls for events" and that they would be going through the proposals as a team before letting the fans know where he will make his next appearance.

They have now decided that on New Year's Day, 450 will be in Orlando and then move on to Tampa on January 15. The tour will also find the fast-rising deejay in Connecticut and Toronto, Canada, with more dates waiting to be confirmed. He has also shared that he will be in the UK by Easter.

Fresh off the release of hit singles Imperfection and Journey, the dancehall deejay was one of the interesting rising acts expected to cause a stir in 2021. The emotions in Imperfection are real and straightforward and it garnered 450 five millions views on YouTube in five months, which he finds humbling.

He said, "I can't speak for anyone else but this is just me putting out music that has to do with my experiences in a way I know best."

Several emerging dancehall acts have made a mark this year and many more are eyeing MOBO and Grammy Awards early on in their careers. But 450 does not intend on making his journey about setting sights too high or too low.

"I'm taking my career one step at a time. Me and my team will accomplish the accolades we want in due time but for now the focus is on putting in the work," 450 said.