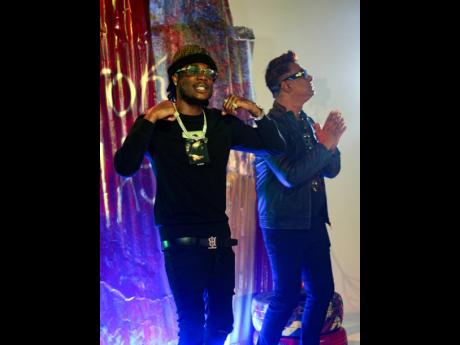 Masicka (left) and Wesrok team up for a unique fusion of their sounds.

Recording artistes Wesrok and Masicka recently teamed up for a single that fuses their respective signature country-reggae and dancehall sounds.

During a video shoot on Sunday, they spoke about the inspiration behind the project in an interview with THE STAR, where the topic of dancehall's authenticity was also addressed.

"Firstly, it's just the message in the song that made me want be part of it; it's a positive one," Masicka said. The Troyton Music production, titled Try To Hold Me, speaks about struggle and the act of suppression among people while keeping optimistic through it all. Masicka said that the experience working with Wesrok has been a good one, describing the singer as a "humble person". Though his image is that of a hardcore dancehall entertainer, he said that he listens to all genres of music and does have a few country and western favourites.

"I like Kenny Rogers' The Gambler and the one about his daughter - Butterfly Kisses. Music remains a universal language and, personally, me listen every type of music. Me woulda possibly do every genre if I could but you know the saying 'jack of all trades, master of none', [so] I am just trying to master dancehall and reggae right now," he shared.

Masicka does not believe that collaborations like Try To Hold Me or the fusion of other genres with dancehall affects the authenticity.

"This can't be taking it away; if someone is seeing the music or trying to emulate the sound and push it forward, it does not do that. But the users have to credit the origin [of the music]. As long as that is in perspective, we can't lose authenticity," he said. "When the music grows, you don't lose authenticity. Dancehall is evolving and people scared of change, but you know you can't keep it in one little box forever."

"The only way we lose the authenticity of a genre is if the younger generation is not educated or not enthusiastic about maintaining the culture," offered Wesrok. He explained that a fusion of genres and sounds like country and western and reggae, coined country-reggae, with dancehall, only shows the dynamic nature of the sound.

"It's not static; it does not mean we can't be creative with the sound. Dancehall first evolved out of reggae, and reggae has evolved for many years out of other genres. For me, it's about sending a message to different audiences and, if my goal is to reach a wider audience, the music - the sound of it - must be relevant and appealing," Wesrok explained.

He was ecstatic to finally meet up with Masicka to record the official video. With the successful release of the Update deejay's album last month, he expressed that "now is the opportune time to do this".

"I want to reach as many persons in our little sphere and I chose to make that link with dancehall, through Masicka, who Troyton said was the best choice. He does have the talent, a large number of supporters. He has that flair and actually complements my voice well as a dancehall artiste. We had a lyric video out but he was overseas and the moment has arrived," he said.