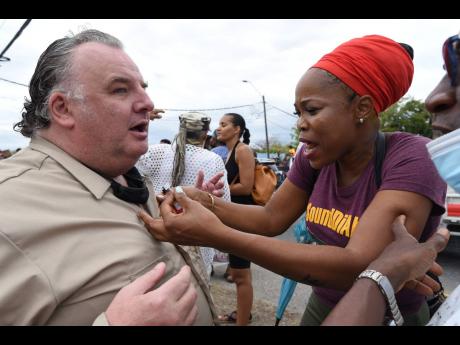 Jamaican reggae artiste Queen Ifrica (right) animatedly makes a point to Andrew Lumsden, a financial adviser, as they participate in an anti-royalist protest near the British High Commission in New Kingston on Tuesday. 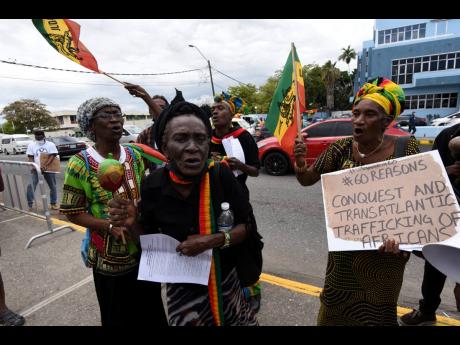 Scores of people turned out to protest the royal visit by the Duke and Duchess of Cambridge along Trafalgar Road in New Kingston on Tuesday. 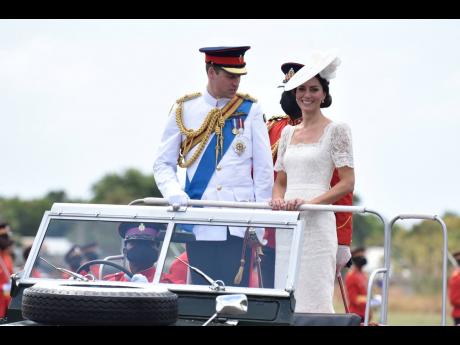 Prince William and Kate, the Duke and Duchess of Cambridge, aboard a Land Rover that was used to transport William’s grandmother, Queen Elizabeth, in 1962. The couple attended a commissioning parade on Thursday at the Jamaican army headquarters.
1
2
3

Reggae royalty Queen Ifrica said that Britain must do more than apologise for the horrors of slavery, arguing it is also necessary for there to be an acknowledgement of the ills that slavery and the slave trade had on the African people.

"I'm not necessarily looking for an apology but for them to acknowledge the issues. Acknowledging and an apology is different, because you can acknowledge and not apologise, and you can apologise and don't acknowledge -- just doing it for argument sake," she said.

Ifrica was among scores of protesters who converged outside the gates of the British High Commission on Trafalgar Road, Kingston, on Tuesday demanding apologies and reparation for slavery from the British government. The protest took place as the Duke and Duchess of Cambridge, William and Kate, arrived in Jamaica for a three-day visit, commemorating the 70th year of Queen Elizabeth II on the throne.

On Wednesday William expressed his "profound sorrow" for slavery, during a State dinner held at King's House.

"I strongly agree with my father, The Prince of Wales, who said in Barbados last year that the appalling atrocity of slavery forever stains our history. I want to express my profound sorrow. Slavery was abhorrent, and it should never have happened," William said.

Prince William's statement was dismissed by Advocates Network, which said it is now an apology.

"The expression of "profound sorrow," is unacceptable. Why? It is merely an acknowledgement that slavery was abhorrent," the group said.

Ifrica reasoned that Britain must go further than the mere words that have been uttered. She, like the other protesters, said that reparation must be part of the discussions.

"Fact of the matter is Jamaica is in the state it is in -- we don't even have to talk about what state it is in, we see the state the country is in -- and their grandmother is still the head of everything that happens here. So If you are the head of everything happening, the right thing to do is to do the right thing. That's to free us once and for all of that colonisation," Ifrica said.

The Lioness on the Rise singer-songwriter said the protest was a manifestation of what she's been singing about for years, but shared that she often times felt unheard.

"It's as though Queen Ifrica dead inna the music industry right now... is like she doesn't exist in reggae. If it wasn't for the people who know that what I do is relevant, I wouldn't be relevant in society today."

She shared that she will not be discouraged to spread awareness on the need to be "truly free" through her music, "regardless of any societal push back."

"I'm at the point of serendipity because I've done so much of the pleasing and begging and asking for people to understand the power that music has. I'm taking my message to the next level for people to see that self-development is the greatest gift you can gift yourself [so] that's where I'm at in terms of what I write... writing what I feel, how I feel and expressing myself. And the music has never been about my personal beliefs or what I want for myself."