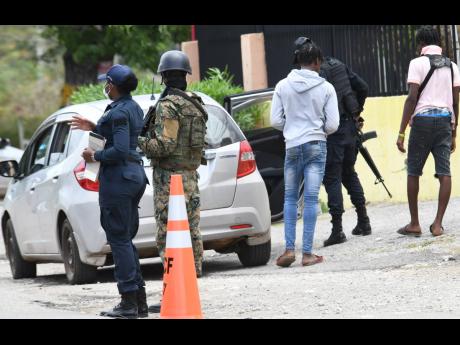 Members of the security forces, man a checkpoint on St John’s Road in St Catherine.

The State of Public Emergency (SOE) declared in St Catherine last Friday has forced some event promoters to cancel parties and some are even seeking locations outside of the parish.

One major event which has been postponed is Di Unit Sound's anniversary which was slated for this Saturday in Portmore. David 'Tallboss' Scott, a proprietor for the award-winning sound system, said that the team was patiently waiting for the SOE to be lifted but made the "sensible" choice of moving the anniversary celebration to August 12.

"I think everybody is anxious because this is yet again another loss for the entertainment sector and for the parish of St Catherine. The economy of the parish also thrives on entertainment and is not Portmore is the problem but the good suffer for the bad," he said, noting that the recent flare-ups in violence have been happening in parts of the parish.

"It's not the whole of St Catherine and if I were to approach it, I'd target the hotspots directly because people families can't survive under these conditions, not the SOE, not the increased crime and violence," Scott said. Jermain Burrows, another popular party promoter and disc jockey, called for capital punishment as a solution to the crime and violence.

"Let some youths know, if unuh even touch a gun unuh a get 40 years and if unuh kill, unuh deserve fi get hang inna Half-Way Tree Square. A lack of education and other factors cause all this. Yuh haffi be tougher pon these youths. Nuff a dem a grow without father - rough and tough - so some a dem nah nuh heart," he said.

He said implementing the SOE is "like a cycle," because they get results but soon after everything returns to disorder. He is also considering hosting events outside of the parish.

"I currently reside in Kingston, but I prefer to host my events in Spanish Town because that is my base. Ensom City is where I called home and I see it was a way of uplifting the economic status of the community," he said. "Depending on what happens, me haffi bring it to Kingston because we already outta road a promote and we did done lose two years due to COVID or just cancel 2022. Financially, this affecting the whole business of Spanish Town from the taxi man to peanut man inna di party and the man dem weh park car."

An Old Harbour-based promoter, who requested anonymity, agreed that there needs to be stricter punishment for criminals.

"Maybe if we start hang criminals who think it easy fi kill an entire family, and innocent children or take people life, people will learn," the promoter said.