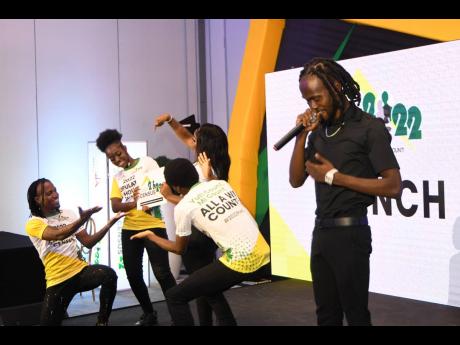 Laa Lee and dancers perform the 2022 Census jingle at the recent launch event.

'Census seh al A wi count' is the catchy line of the 2022 Population and Housing Census jingle performed by dancehall entertainer Laa Lee, in support of Jamaica's 15th National Census, set to begin on September 13.

The energetic artiste presented the jingle and dance at the official launch of the 2022 census recently at the AC by Marriott Hotel. The jingle, which was written based on the tagline for this year's census, 'Yuh Count, Mi Count, All A Wi Count', also inspired a dance which combines Laa Lee's popular dances, including 'Leggo Di Bird' and 'Dirt Bounce'. In the jingle, Laa Lee highlights the importance of the census and encourages citizens to ' doe badda hide when yuh see them', referring to census takers.

The 2022 census, to be conducted from September 13 through to December 2022 by the Statistical Institute of Jamaica (STATIN), will see over 7,500 census takers going into communities across the island to collect information on households, housing quality and other details. Persons in private homes, hospitals, correctional centres, children's homes, university residencies, and those living on the streets will be approached by the data collectors, who will gather information on various topics, including age, sex, religion and educational level.

Using a jingle to help portray the messaging of the census is not a new move by STATIN. The institution has always sought to incorporate culture in educating and informing Jamaicans about the census and its importance.

Prime Minister Andrew Holness, who attended the launch, expressed gratitude to Laa Lee for his participation and urged Jamaicans to take part in the census, as the data collected will be used to guide policies that will ultimately benefit them.

"I was very happy to see Laa Lee here with us using his platform to garner support behind such an important national project. We urge all Jamaicans to participate in the census, and assure you that the system is designed to protect your data," he said.

The data collected from the 2022 census will be used to inform policy decisions and the development of government programmes and services, as well as business expansion and development.