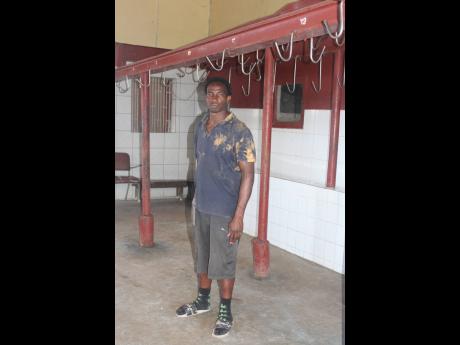 Andrew Thomas has been a butcher for the past 18 years. 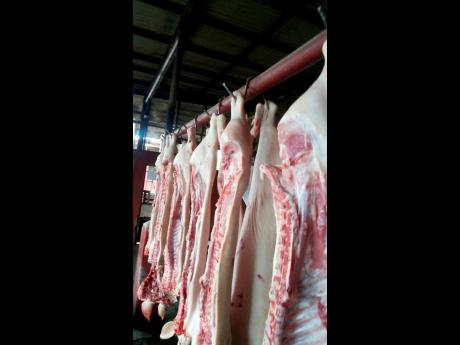 Upon entering a room and opening his mouth, Andrew Thomas immediately captures the attention of all occupants.

As a result of his unique vocalisation, the 43-year-old butcher has become known as ‘Voice’ among customers, colleagues, friends and family. Voice has been licensed to kill animals since the age of 25, and has been employed at Orchard Farms in St Catherine since then.

“My father and my auntie used to work here, and me come here come do delivery work and wash down the slaughter house, then the boss tell me to start butchering,” he said.

“Butchering nice to me, mi feel comfortable doing it. Animal wah kill me and me get fi kill them,” Voice continued, while laughing.

Under the law, no animal intended for human consumption must be slaughtered anywhere else but at a slaughterhouse.

In addition, the law states that no person shall operate as a butcher unless he has a valid licence granted by the Local Board of Health. He must also have a valid food handler’s permit.

The law also requires that persons give the police at least 12 hours’ notice of the intention to kill an animal before the slaughtering takes place. The butcher must then ensure that animals are taken to the place of slaughter at least six hours before.

Voice, who hails from St Mary, is one of two butchers at Orchard Farms. He told THE STAR that the Christmas season means more butchering, because many customers are now purchasing a little extra to feed the added mouths in their homes for the season.

“Like how a Christmas, we might kill up to 13 per week rather than eight, because people weh used to take half-pound of beef might take one pound,” Voice said.

He recalls Christmas 2008, when there was an influx of buyers for the boneless chuck roast (pot roast), as his busiest time with knife in hand.

Voice says that pot roast is a preferred choice for customers, not only at Christmas time, but throughout the year.

And although he is mainly responsible for the butchering of cattle, Voice’s favourite meat is pork.

“Pork nice bad, worst when it jerk and yuh lef some fi the next day. Nothing nuh nice so,” he told THE STAR.