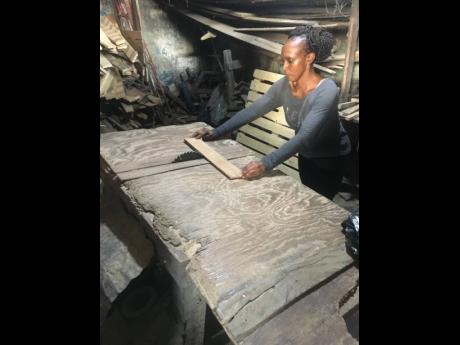 Raquel Williams shows her prowess on the table saw. 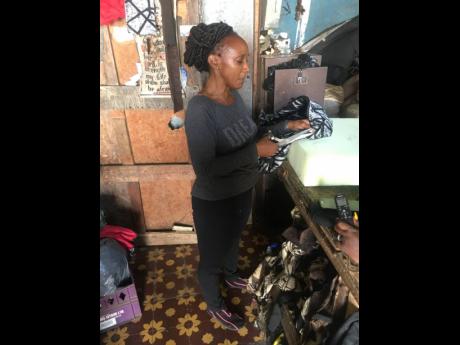 Raquel Williams, the sole female employed at Greg’s Upholstery on North Street in downtown Kingston, is no stranger to wide eyes and stares when she is at work.

But Williams said that she is not afraid to get her hands dirty and has no problem participating in what is usually considered a ‘man’s job’.

“Sometimes people will pass me and go to one of the men and ask if they can speak to the person in charge, and when they are directed to me, they will say, ‘oh it’s you!’. Sometimes, the females who come give me a lot of attitude, and there are some persons who don’t believe I can do the job as well as the men. But they always come back to compliment me. I love this work, and I don’t see myself doing anything else,” she said.

When the news team visited the 42-year-old at the establishment yesterday, she was busy sticking wrapping to a sofa, which was in the final stages of completion.

She stated that when she enrolled at the HEART Trust/NTA years ago, she learned several skills, including catering and food preparation. But she said that her first love was clothing and textiles.

“Is 10 years now mi a sew, but four years ago, I heard that this business place was seeking another employee, and I joined the team, and I haven’t regretted it. I can sew really well, and I can do a lot of stuff in the upholstery and do a lot of designs,” he said.

She stated that being an upholsterer takes a lot of patience

“This is not an easy job, and you have to be extremely patient. Our customers like unique things, so sometimes they will tell you that they like a particular material and then them no bother want it. Sometimes, we will design the item and the customers don’t like it, so we have to do it again. You have to really love the work to do this job,” he said.

Williams is not just a versatile machine operator, but if the need arises, she will operate the table saw as well.

With furniture stores and walk-ins as their main customers, Williams said they can easily sell up to three sofas per day.

“There are times when we are really busy, especially during the Christmas season. Everyone is buying and repairing sofas and hassocks that time. Some of the nights in December, I don’t go home. I stay here and work all night,” she said.

While some young people may turn up their noses at the trade, Williams said the majority have a keen interest in learning the trade.

“A lot of young people are going into upholstery and similar trades. Even in the funeral industry, we see them doing it as well … both males and females are doing it, and I will always encourage it because it is best to have a trade,” she said.