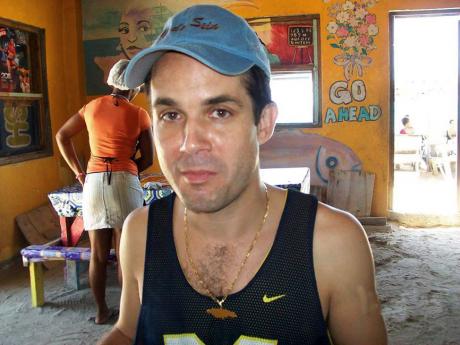 Jean-Paul Menou, known as the fast-talking quiz master on TVJ's Schools' Challenge Quiz, was apparently not fast enough on his feet, to catch the chain grabbers, who snatched his precious gold chain in downtown Kingston recently.

"My parents lived in Africa for a while when I was little and they got me that chain. The pendant was a custom made mini map of Jamaica. Both the pendant and chain are gold," Menou explained.

Menou, who also presents news on Power 106, said he was running an errand on Church Street two weeks ago. However, being unfamiliar with the area, he was walking around asking for directions when the incident occurred.

"I just felt three or four teenage boys coming around me and one guy just lunged at me and grabbed the chain off my neck. I stood there for a second, and I didn't know what had happened because it happened so fast. You know, you just don't expect this kind of thing to happen to you," Menou admitted.

Menou said he pursued the chain snatcher while yelling, "Thief! Somebody stop him!" as loudly as his voice allowed, but to no avail, as the thief escaped into the Pearnel Charles Arcade.

With stares of ridicule from bystanders, Menou said he began asking if they had seen where the thief went. However, everyone said no. He said one person even added, "You lucky! You could have been killed or something."

Although thankful that he is still alive following the frightening ordeal, Menou says he is appealing for the return of his chain, as it has significant sentimental value.

"Even my friends say they don't know me without the chain. I have had it for about 20 years," Menou lamented.

Menou said he is willing to compensate anyone who returns his precious gold chain. He said persons with information can contact him at The Gleaner, which is located at 7 North Street in Kingston or at TVJ on Lyndhurst Road in St Andrew.