Woman claims brother's killer is not a 'madman' 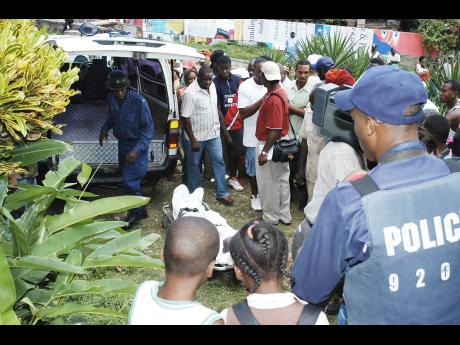 Bodies being removed from a crime scene.

The Porter family in Warwick, Manchester, was plunged into mourning following the vicious attack on one of their own early Friday morning. Thirty-one-year-old Ainsworth Porter was found with his head severed from his body at his home in the parish.

Assistant Commissioner of Police Clifford Chambers said that a mentally challenged man, identified as Howard Munroe, escaped in bushes after the alleged attack and is believed to have fled the parish.

Porter's sisters Shauna and Shawna Kay Porter, who were his caregivers, said that they are shocked and outraged at their brother's vicious murder.

According to Shawna, her brother has been disabled from 2004 and was not a troublemaker.

"He didn't have a girlfriend or even a child. He was hit by a motor car and could not manage to take care of himself. He spent months in the hospital and at rehab. He couldn't work or anything, and he walked with a cane because one of his legs and arm was badly damaged," she said.

Shauna said that last Thursday evening was like any other for Ainsworth who he would visit his friend, Cleon Daley's, shop for a game of dominoes. He later proceeded to walk home with a friend when the other man was attacked by a machete-wielding man.

"The man chopped after the friend, and he ran. Someone escorted Ainsworth home and put him in the house safely, while the police take the next man home. My sister was not home at the time, so he spent the night alone," she said.

According to Shauna, she was greeted by blood on the steps that lead to her brother's dwelling but thought that he had fell and hit his head from an epilepsy attack.

"My brother was also affected by seizures so when me see the blood on the steps, me a tell myself say it look like him have another attack. But when me reach inside, me see him head separate from him body completely and all me coulda do was scream," Shauna said.

The shop owner, Daley, was also chopped and wounded later in the morning, allegedly by the person who had killed Ainsworth. But according to Shauna, her brother's killer is no 'madman'.

"The man who supposedly kill him is no madman cause him cover him tracks good. Him chopped and kick him door in and go inside. Him nuh leave no fingerprint on the wall or anything. We nuh see no trace going anywhere," she said.

Meanwhile, Chambers said that following the incident, angry residents set fire to Munroe's home and attacked his caregiver, who they accused of not ensuring that the mentally challenged man takes his medication.

He said that the caregiver has since been taken into protective custody to ensure his safety.